Wireless power. It’s less sci-fi sounding than it once was, thanks to induction charging like that based on the Qi standard, but that’s still a tech that essentially requires contact, if not incredibly close proximity. Magnetic resonance is another means to achieve wireless power, and perfect for much higher-demand applications, like charging cars. But there’s been very little work done in terms of building a solution that can power your everyday devices in a way that doesn’t require thought or changing the way we use our devices dramatically.

That’s where Cota by Ossia comes in. The startup is the brainchild of physicist Hatem Zeine, who decided to focus on delivering wireless power in a way that was commercially viable, both for large-scale industrial applications and for consumer use. Zeine has been hard at work developing his wireless power technology and refining its delivery for over a decade now, and has built Ossia under wraps, managing to raise an impressive $3.2 million along the way while also keeping the startup almost completely invisible to the outside world.

Today, however, Zeine is ready to show what Ossia can do, and he’s presenting the first public demo of the Cota wireless charging prototype on-stage at Disrupt and revealing his company Ossia publicly for the first time. Despite the fact that no one’s heard of Ossia, the Cota prototype in its current form already managed to deliver power wirelessly to devices over distances of around 10 feet, delivering around 10 percent of the total original source power to recipient devices using the same unlicensed spectrum that powers Wi-Fi, Bluetooth, Zigbee and other wireless communication standards.

“I got fascinated by electromagnetic radiation, the way that light and optics and radio waves are the same thing,” Zeine said, explaining how he got interested in the subject while studying physics as a student. “And I got thinking about ‘what can you really do beyond this?’ there is something about the linearity of physics and the non-linearity of physics. most people are familiar with the linear version, which is the common sense version, where two apples are twice the weight of one, for instance.”

“In wave theory and electromagnetic systems, you don’t get linearities everywhere,” he added, describing the science behind Cota. “There are situations where double could mean for more, like double could mean square, or 3 plus 3 apples could result in a net total of 9 apples, so to speak. When you move from the linear version to the power version, things happen that were quite surprising.”

I was always thinking, “What’s the catch?”

Zeine started doing computer simulations to figure out what he was on to, but says unlike Thomas Edison, for example, who started with a problem and tried to solve it but came up with many failures before success, he started out with a solution and found many problems that it does solve, including questions around health, safety, interference with other wireless signals, delivering power to multiple devices, non-line of site, around and behind walls and more. “I was always thinking ‘What’s the catch?’,” he said, “But sometimes an invention just solves the problem and goes all the way. This was one of them, we had something here that was much, much different than what people expect.”

When Zeine then decided to turn Cota’s wireless charging into a company, he faced understandable and considerable skepticism. Naysayers suggested he couldn’t deliver wireless power safely, or with adequate efficiency to be useful, or consistently, or any number of objections you yourself are probably cycling through at this moment. Skepticism aside, Zeine stuck to his guns and set about commercializing his discovery. In 2007, Zeine filed his first patent for the tech, formed Ossia in 2008 and continued to file patents, and he says now the company has a much deeper understanding of how it works. They’ve built the prototype they’re demoing on stage, and have another in the works to debut later this year.

“What we’re doing uses the same frequencies as Wi-Fi,” he explained. “It’s the unlicensed spectrum that’s used by Wi-Fi, and many phones, Bluetooth and Zigbee devices and so on in our lives. The nice thing about this frequency is that it’s just the sweet spot for our technology for distance, safety, for the size of the antennas and the hardware that we use, it’s just a perfect level. Also it’s well understood, since people have had Wi-Fi in their homes for a long time now.” 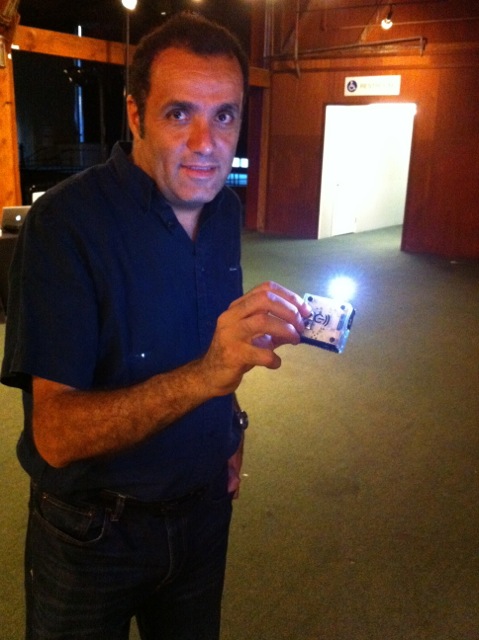 Obviously health and safety is going to be a foreground concern when it comes to new wireless tech of any kind, but something that’s designed to be able to provide enough energy to power up devices will definitely raise eyebrows. Aside from being at a late stage in terms of gaining FCC clearance, Zeine says Ossia also benefits from using the same kind of spectrum that Wi-Fi broadcasts at, and says Cota offers the same kind of health risks that Wi-Fi in-home does. Academic research on how much that actually is may differ, but consumers definitely seem willing to accept the risks associated with Wi-Fi, Bluetooth and other similar specifications.

“Cota is the only wireless power technology that can deliver one watt of power at a distance of 30 ft safely,” Zeine said on stage today at Disrupt, highlighting range as well as health and safety. During his presentation, Zeine showed an iPhone 5 being charged remotely from his version one prototype wireless power transmitter, which was greeted by plenty of applause from those in attendance.

The next step for Cota is delivering a commercial-grade product capable of replacing the numerous wired power connections for sensors and monitors in sensitive facilities like oil and gas refineries with wirelessly powered devices, which decreases risk by minimizing the number of potential opportunities there are for generating sparks, since there are fewer live cables lying around. Commercialized versions should be ready to ship in the next couple of months, Zeine says, with consumerized versions following in 2015. Neither would’ve been possible in terms of cost alone 20 years ago, he adds, but advances in the tech of Cota system components have made it possible to do with thousands what would once have cost millions.

Long-term, the vision of Zeine and Ossia is one where you’re never out of wireless charging range – charging networks spanning home, public spaces and offices would make it possible to build devices like phones and remotes with only small batteries, that are constantly topped off and that never need to be plugged in. He says the aim is not just to disrupt the battery, but eventually even to eliminate the concept of “charging” as a conscious act altogether.

1. Do you want to license your tech to OEMs?

A: Cota will provide licensing of patents, hardware designs, and also its own hardware and patent licensing.

2. What is the cost of this for consumers, and size of household device?

A: The Cota will be over $100, and be about the size of a large tower PC once consumerized.

3. Can the transmitter be smaller?

A: The size of the current device is due to using off-the-shelf parts, so it can be reduced tremendously using custom parts.

4. Does it require line-of-sight?

A: No, it can go around walls and through walls just like a Wi-Fi signal.

5. Is there some sort of identification, can a device take power from a system unauthorized?

A: You can configure the system to recognize only a specific set of devices, or open if you want to power all Cota-tech enabled devices.