StatCounter — the research group that tracks Internet usage by browser, platform and device, among other things — has released some numbers that indicate that while Apple continues to keep its traditional lead as the most-popular brand for mobile Internet browsing in certain markets, globally, Samsung is now leading the pack — not just because it comes in first in markets like Western Europe and South America, but also because of its strong showing even in markets where Apple is ahead.

The news comes as many accounts point to Apple working on a new, less-expensive version of the iPhone, which could be announced at the company’s big event tomorrow. Some believe a cheaper iPHone will be used to gain more headway among more price-sensitive consumers — both in the U.S. and emerging markets like China — who have shied away from its flagship iPhone models because of high prices.

If true, it could not come a moment too soon. StatCounter notes that in the month of August, Samsung worldwide accounted for 26.59% of Internet use on mobile devices, compared to 23.39% for Apple. Interestingly, while Nokia has really taken a nosedive when it comes to recent smartphone sales and is recovering but only slowly, the devices that it does have in use in the market — smartphones as well as feature phones with Internet access — have kept the company in a strong third position. It accounted for 21.66% of mobile Internet traffic in the month of August. 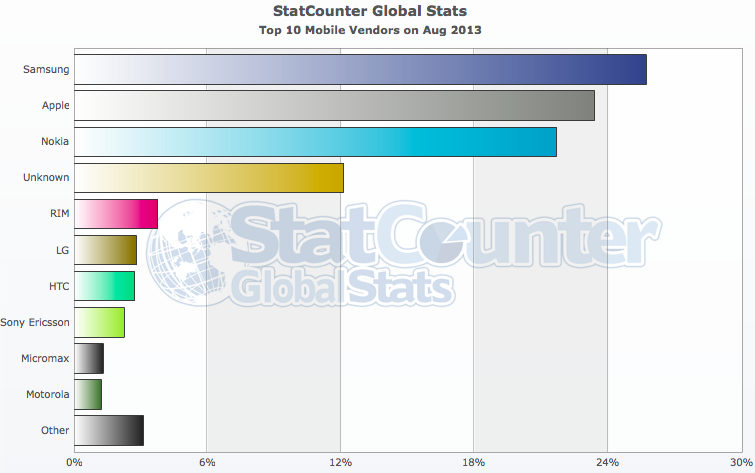 Looking at the stats through a global map, you get an interesting geographic breakdown.

Apple continues to remain in a very strong lead in the U.S. with over 52% of all mobile Internet traffic coming from its devices, compared to just under 19% for number-two Samsung.

In smaller markets like the UK where the iPhone is very popular, so too is the device for Internet usage, accounting for just under 48% of all browsing to Samsung’s 21.5%.

Even in countries like Russia, where Android currently dominates smartphone sales, Apple continues to keep its position as the most “sticky” brand when it comes to using handsets for more than just basic calls and texts, with 28% of mobile Internet browsing. But this emerging market is an example of where Samsung is nipping at Apple’s feet, with nearly 21% of mobile browsing coming from its devices.

In China, which is a key target for all smartphone makers, neither Samsung nor Apple are in the lead. Rather, it’s the mix of many different handset makers, likely building on official or forked versions of Android, who are killing it (we’ve reached out to StatCounter for more clarity on that point). They collectively take nearly 35% of mobile Internet browsing traffic, while Samsung and Apple are nearly level at 13.7% and 14.2% respectively — in other words, another BRIC market, like Russia, where the two single biggest players continue to compete fiercely.

In Brazil and India, the two other big BRIC markets, Samsung handily is beating Apple, with 36% of traffic in Brazil compared to 16% for Apple and Nokia wedged in between at 19%. In India Nokia is very much the leader with 45% of the market to Samsung’s 27% and just 1% for Apple.

“Over the past 12 months Apple has increased its share in the US and UK but globally there is an on-going battle taking place between it and Samsung,” writes Aodhan Cullen, CEO StatCounter. “Should the rumors prove true, it will be fascinating to see if a less expensive iPhone will help it increase market share against lower cost competitors in global markets.” 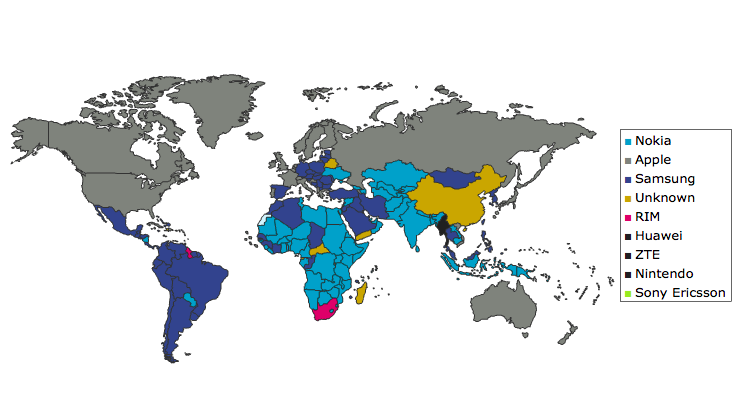 So what’s the significance of this? As the Nokia example above highlights, while internet usage is not directly correlated (but related) to smartphone ownership and sales, there a couple of other points to take away here.

First, if Samsung is overtaking Apple in mobile internet usage, that fact longer term will have an impact both on what kind of leverage Apple will have with carriers when it strikes deals with them — carriers have loved the iPhone in part because it lures high-spending customers to their networks.

Second, it could also start to have an impact with developers, who has largely been faithful to iOS as its first port of call for app development, because iPhone owners have traditionally been the most engaged group. Numbers like these point to how that balance is shifting, and that in turn could translate into Apple losing its reputation as host of the very best and biggest app store.

On the other hand, while there is a clear opportunity for Apple to swoop in with devices for most cost-conscious users, this may not be the approach that it chooses to take — or, indeed, that it has ever taken. Consider predictions of how a “low-cost” device might actually end up being just “less cost” — that is, priced in the region of $400 or possibly even more. If that kind of pricing comes to pass, it too raises questions about how effective a new device will be to turn usage numbers more strongly in Apple’s favor (and maybe puts even more emphasis on how Apple links up with subsidizing carriers).