Have you ever wished you had something like the Marauder’s Map from Harry Potter for business networking at events? That’s the promise of the app called TARGiT, emerging out of the TechCrunch Disrupt SF 2013 Hackathon today. The app, initially designed for iOS, will use the NewAer platform to locate event-goers in real time using smartphone radio signals instead of power-hungry GPS, then plots attendees on the map as moving avatars. The app’s users, meanwhile, can search for those with the skill sets they’re interested in and reach out to connect with them via LinkedIn…or, you know, just stalk them right there at the event itself. 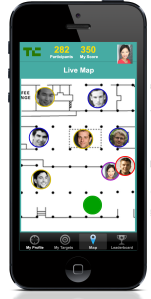 TARGiT was built by Theresa Lim from Sydney and Carlos Mosqueda from Monterrey, Mexico. The two met for the first time at the Hackathon here in San Francisco. Lim is a management consultant by day whose audience interaction polling service Play2Lead came in second at the Angelhack hackathon in Sydney earlier this year. Mosqueda is currently a co-founder at Driblet, a smart water sensor in the prototyping phases, which was also presented today at the hackathon.

Lim explains that TARGiT is actually meant to work as a layer on top of Play2Lead, a social media-infused service that enables audience polling and participation at events. The mobile app could be an additional aspect of this overall platform, which can also optionally be white-labeled ahead of use by event hosts.

Users are encouraged to log in via LinkedIn in order to gain more points in the app. They can then configure what kind of skills they’re in search of while at the event, and the map will immediately update following this input, removing the avatars of those whose don’t match the desired qualifications. For example, a designer could specify they want to network with other designers, and the map will change to show where those folks are now, and where they’re heading. For event users who don’t want to network for a given time period, they can “cloak” themselves to remove their avatar from the map.

TARGiT includes a number of gamification elements, including leaderboards and points for things like adding social media profiles or “bumping into” other attendees (as determined by proximity). Users can also see a list called “My Peers,” which shows the other event goers who are networking in the same manner and as efficiently as they are.

Lim thinks of TARGiT as something like dating app Tinder. The app itself is still in the design phases, but the plan is to launch TARGiT to Apple’s App Store by October.