Alberto Garcia and Tenoch Gonzalez came all the way from Mexico City to participate in the TechCrunch Disrupt SF 2013 Hackathon for the first time. Their hack, called Alerter, is a hardware device that, when combined with a smartphone app running on iOS or Android, can alert parents when their child strays too far from the house or yard. Using Bluetooth low energy technology, a microcontroller from Texas Instruments, and some parts from Radio Shack, including a battery and speaker, the Alerter hardware will be minimized in future versions to fit on a child’s belt buckle. 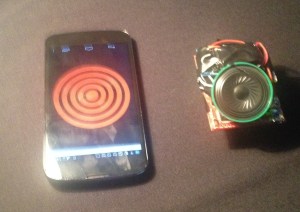 The device has a range of 5 to 10 meters, the team tells us, and could be as small as 1 square inch when they use different parts. (The hackathon version is more of a proof-of-concept, of course). Using the smartphone application, parents can pair the phone to the device and configure the distance settings they desire. Of course, unlike family locator software-only apps, the Alerter won’t be able to track a child all over the town, or even the neighborhood. But it could, perhaps, warn mom or dad when the child strays from the yard, for example.

The team plans to raise money on Kickstarter for an initial run of some 1,000 devices, but aren’t yet sure how much money they’ll need to do so. They plan to put up a Kickstarter page sometime next week. For now, they have a Launchrock website instead.

Garcia and Gonzalez aren’t strangers to hackathons or building tech companies. The friends already have their own startups underway, in fact. Garcia’s Hostspot, a Google analytics for brick-and-mortar retailers, for example, won the 2013 AngelHack in Silicon Valley, while Gonzalez is developing a market research firm, Liichi.com.