A new report released today confirms earlier findings indicating a mobile app’s ranking in the iTunes App Store is now taking into account ratings and other metrics in order to help determine its place on the charts. According to Appurify, the Google Ventures-backed startup behind an app debugging, testing and performance optimization platform, not only are app ratings now influencing rankings, but even a half star bump in ratings alone can significantly increase rating and review activity. And this, in turn, can help well-built apps climb further up the charts.

The report details other aspects to this change as well, including how many stars matter, and the value of mobile app updates, among other things.

The findings represent two months’ of work by the Appurify team, which incidentally, now includes those at cisimple, a competing app testing firm which joined Appurify via acquisition in August.

Appurify analyzed the top thousand ranked app in the iTunes App Store, which included around one-third games, 62 paid apps and 590 which were free apps with in-app purchases. Over half the top apps in this group had at least 4.5 stars, and the majority (75 percent) were rated at least 4 stars. That’s not a surprising finding, but Appurify does note that it seems that gaining 4 stars is now practically a minimum requirement to break into the top 1000. 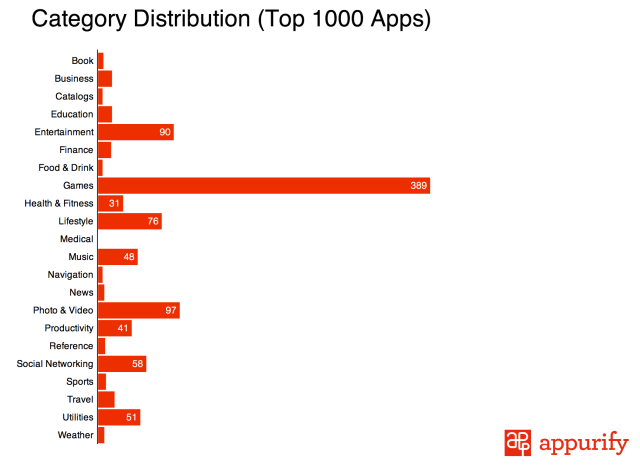 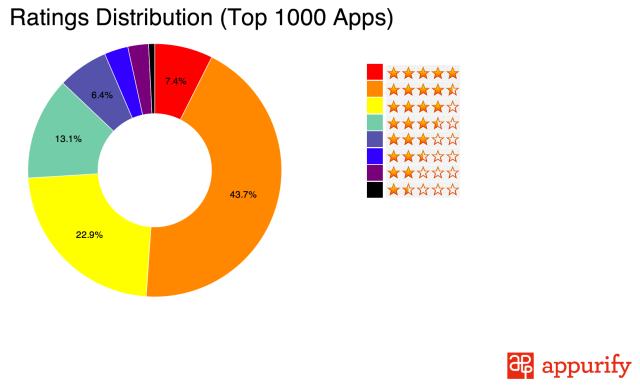 The firm advises that app developers don’t release an app with serious bugs or performance issues, as complaints will keep the star ratings down. Of course, while this is something of a self-serving message considering Appurify’s business, it’s also true. The company had previously found that over half of critical 1-star reviews in the App Store were due to performance issues, and anecdotally, you’ve probably heard and seen the same yourself. 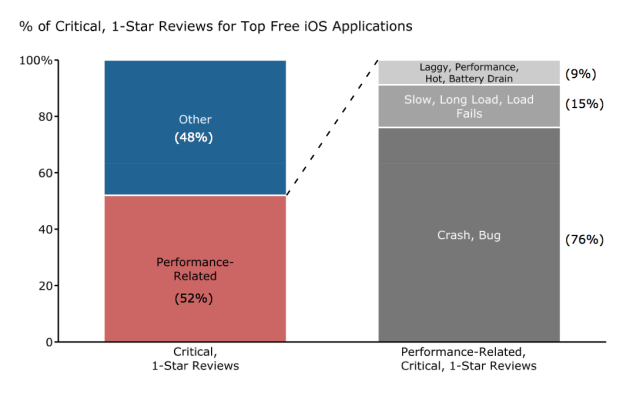 The App Store lacks a means for developers to communicate with app users, like Google Play offers, leading many to turn to alternative meaning of collecting user feedback and engaging with customers outside the App Store’s walls, including via tools from Appsfire, Helpshift, Apptentive, Appboy, AskingPoint, and others. The idea is to keep the one-star reviews off the App Store, while helping customers with their issues. But now, diverting customers to third-party tools is actually impacting rankings.

Apple’s App Store algorithms used to take into account download volumes and velocity as the two largest factors that determined an app’s rank. Ratings, however, started to impact rankings sometime in July, according to Fiksu’s earlier findings, today confirmed by Appurify.

Developers can release updates for bug fixes and performance problems for a chance to start fresh – the new version’s ratings are featured more prominently in the App Store, and are those consumers see first when deciding to buy. 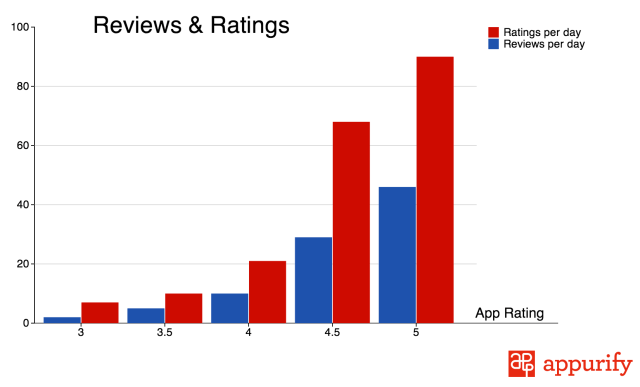 In addition, looking at the number of reviews and ratings per day that apps received, Appurify found that higher-rated apps attracted more reviews and ratings per day than poorly rated apps. Between the 4-star and 4.5-star apps, activity roughly tripled, for example, indicating that every half star could potentially increase ratings and review activity on an app threefold.

By analyzing apps across three buckets (top 300, 300-600, and 600+), Appurify found that as the higher rated apps moved up in rankings, the rating activity grew. 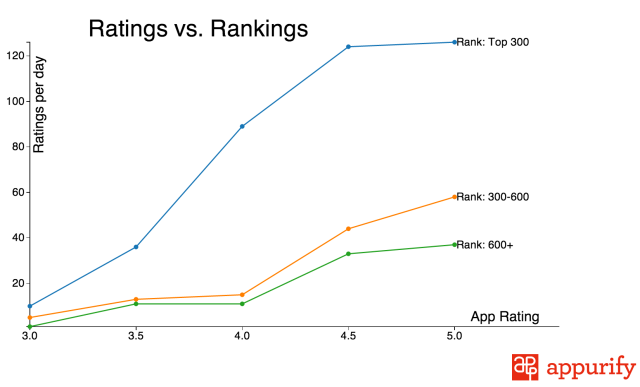 That’s maybe more of an obvious finding, as those apps higher in the charts probably have more users (a 4.5-star app, for example, will be downloaded about 3.7x more than a 3.5-star app) – meaning it would have more chance for reviews, too. But assuming a developer can use this increased rating and review activity to even further boost their app’s overall average rating, they can actually begin to move their app up the charts, thanks to Apple’s changed algorithm.

“Our conjecture is that Apple must be using [the current average] rating in its ranking algorithms, because that would explain why – when accumulated over time – the number of ratings clicks is significantly higher for higher rated apps,” says Ramamurthi.

The full report is available here on the Appurify website.