Evomail, one of the many newer startups trying to rethink the email inbox for mobile, has now arrived on Android. Originally designed as a Gmail client for iPad, the service seemed inspired by a number of well-known apps and email clients, including now Google-owned Sparrow, as well as Dropbox-acquired Mailbox, which popularized the use of gestures as a way to interact with your email.

The iOS version of Evomail, now iPhone-optimized as well, introduced a variety of features including push notifications for new messages, folders and labels, snoozing functionality, and gestures that let you swipe to delete or archive, shake to press and hold to label, star, reply, forward, or mark as read and more for example. These same features are now available on Android. 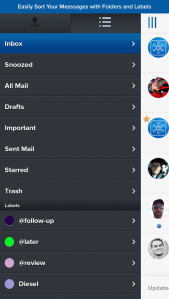 When the company first debuted its app in May, reviewers typically found the interface clean and polished and the app easy enough to use, but also encountered several bugs. Co-founder and CEO Jonathan George explains that today, the major issues have been addressed, thanks to Evomail’s fast weekly release cycle.

George previously co-founded Boxcar, the push notifications service for developers that was acquired by Kwaga in July 2012. He says he thought up the idea for Evomail the evening he signed the acquisition papers. “Email has received many new coats of paint over the years, but no one has really gone in and renovated the entire house,” he explains. “We did just that by building EvoCloud, which is a layer on top of email.”

EvoCloud is meant to address the problems that email previously faced due to fragmentation of mail servers — that is, if you needed to build out a feature requiring server support, you would have to have all the providers build support for it as well, and upgrade their own systems. Instead, EvoCloud centralizes the mail providers into one layer, allowing the company to build its own server functionality like Gmail’s Priority Inbox, or their new tabs interface, and then make that available to anyone – even those who aren’t using Gmail. 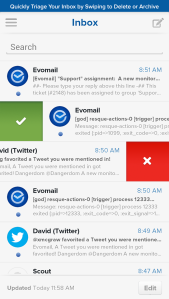 Today, Evomail supports a number of mail systems, including of course Gmail, but also Yahoo, iCloud, and other IMAP-enabled services. The company plans to soon begin selling freemium subscriptions to offer users access to features their mail provider may not have offered.

As of last month, the company was reporting 25 percent week-over-week growth on the iOS side, but declined to detail the the number of downloads or actives the app now has. However, the app trails the big-name providers Gmail (#2), Yahoo (#6), Hotmail (#47), as well as Mailbox (#60) in the U.S. app store. The iPhone and iPad versions flirted with the top 100 during launch, but now they struggle to maintain a ranking in the top 500 in the Business category (per App Annie’s stats.)

Reviews for the iOS version are middling, reflecting the company’s still very early nature. Users continue to report bugs and crashes, but others say it’s “getting there.” The app’s design goes a long way to sell its concept, but without the stability and speed, it will be hard to keep users from removing it from their phones. 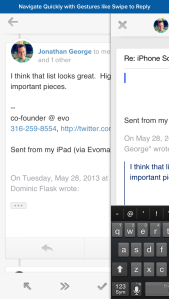 On Android, Evomail hopes to at least have an early mover advantage, by beating out other popular email clients, like Mailbox, to the platform. With an earlier pre-release beta, the app performed the functions as expected, but still seemed very laggy compared with the native Gmail app and others.

However, the company says it’s squashing bugs all the way up until today’s launch, so it’s not possible to do an in-depth review at this time. Likely, it’s still much in the same boat as the iOS version, though: “getting there.” Depending on a number of factors — your email provider, inbox size, how much email you receive (I could be an outlier here, of course), and more — your mileage, as they say, may vary.

But given the stage that Evomail is in, the progress the company has made in only a few months’ time is notable. The Witchita-based startup, also co-founded by David McGraw and Dominic Flask, is essentially bootstrapped, having a tiny team of four and just $100,000 in seed funding. To take on a problem as massive as email under these circumstances is crazy and risky…attributes that, frankly, it’s nice to see.

Evomail for Android is here on Google Play.