Say Something is an app in the making that wants to inject some fun into online dating by letting you practice your small talk on other users of the app before you actually go on any first dates — thereby giving you the chance to make all those awful first impressions somewhere where they won’t count against you. Or rather where, if they do, it doesn’t matter because you’re not actually on a date yet. Where, in fact, it’s helpful feedback if your cloying online overtures are met with a barrage of ROFLs and LMAOs because you’ll know to avoid trying that particular line IRL.

I’m half convinced this app is actually a cunning ruse designed to defuse the self-consciousness of dating by making it into a bit of a game — thus allowing people who want to go on dates to meet other like-minded single folk and get chatting without actually having to have those awkward first conversations framed by the awkward ‘first date’ context. Except they are arguably even more awkwardly framed as ‘this is me pretending to be on a first date’. But then that awkwardness is probably actually going to make things pretty funny — thereby oiling the wheels of a fun first (faux) date. Maybe.

Not so, says Say Something’s London-based founder and CEO Marian Gazdik. The plan is to partner with dating apps not fight them. “Our objective is to help people improve using our app and THEN go and meet people, using Match, eHarmony, Zoosk or whatever,” he stresses.

He spells out the two “key premises” of the app as:

1. People will NOT meet in real life: we don’t encourage it and it is normal that the app’s algorithm will match a man from London with a girl from NY. (Yes, they can end up having fun, but it’s not going to be the main use case).
2. Because they will never meet, they will be much more likely to share honest feedback with each other.

So what does Say Something do? It presents players of its dating game with scenarios where they might be able to strike up a conversation with a handsome stranger IRL, such as in a coffee shop queue or being smiled at in a bar, and then lets them try out an opening line on a player of the opposite sex so they can get feedback on whether it was a killer or a clanger. In short, it’s crowdsourced dating advice. 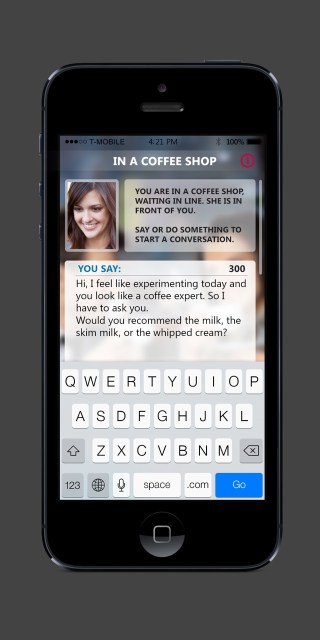 Isn’t practicing dating conversation in bite-sized text snippets just going to encourage people to come up with more cheesy one-liners? “People play with other people. If they use cheesy pick-up lines, the game is over at level one. We have 15 levels,” is Gazdik’s rebuttal.

This is not his first app in this area. Dating SIM, is another of his dating game efforts, which he says has amassed around 22,000 users with “no marketing budget.”

That app started out as a “serious dating advisor for men” and gained only a small user-base (of around 500 users). But after gamifying it to shift the emphasis to fun he realised he was onto something as the number of users swelled.  “People like the relaxed way of learning a topic that stresses them out a lot — dating is very stressful for many,” he adds.

Say Something takes another bite at the dating gamification cherry, but this time, Gazdik says he’s trying to offer something that also appeals to female users.

However there’s one pretty big caveat here: the app makers reckon it’s men who mostly want and need dating conversation practice. Female users of the app are apparently mostly there to provide feedback on how awful (or otherwise) the male players’ chat-up lines have been.

“The app allows men to practice their conversational and dating skills with real women,” notes the description on Say Something’s Indiegogo page [emphasis theirs]. (Yes, its makers are seeking crowdfunding to fund this crowdsourced advice app, to the tune of £20,000 no less).

Female users can get feedback on the responses they give the male players, and can also initiate conversations themselves, but the rules of this dating advice game — as its creators publicly explain them — cast women as the secondary sex, predominantly in a feedback giving role, rather than as people who might want to initiate conversations with sexy strangers themselves. Which does rather put a male-centric spin on the app from the start. So I asked why it doesn’t see demand for women initiating dating conversations.

“Say Something is for men and for women. That is why the starting screen says ‘Say or Do something to start a conversation.’ Both can start a conversation, but we expect, just like in online dating, that men will be the ones who will start most conversations. On the other hand, she can just smile at him, or ask him something in an innocent way, right?” says Gazdik via email, wading deeper into gender stereotyping.

All of which does rather give the impression that the app is wrestling with a contradiction: it needs to attract women to function properly, but may not actually be saying all the right things to get enough women interested in spending quality time with it. More practice required, clearly.

Say Something is presumably angling its conversation at men because it’s hoping to tap into the kind of male appetite for dating advice evinced by the popularity of ‘pick up’ manuals aimed at men, like Neil Strauss’ The Game. The question is whether it’s also doing enough to convince women to take part. A male-centric gamification process could easily give the impression that it’s commodifying or stereotyping the dating experience — to the point where it feels off-putting to women, leaving the app with a paucity of female users to provide the feedback male users crave.

If it can avoid the impression of being unattractively one-sided, and raise the £20,000 needed to finish development and start shouting about its assets, the app makers intend to offer freemium, premium and subscription versions of Say Something. The premium version will include a “contextualised advisor” — offering a player additional guidance so they can “transition” from text snippet into “a normal conversation”. The subscription service will include access to the “latest dating research findings, best tips, polls, dating guides, etc” — for those who want to turn dating from a game into a full-time job.