Mozilla was late to mobile and now it’s trying to catch up. For a while now, the nonprofit has been releasing mobile versions of its Firefox browser for Android, but its most ambitious project to date is its Firefox OS mobile operating system for smartphones.

Earlier this month, the Chinese handset manufacturer ZTE made the first set of its entry-level unlocked $80 Firefox OS phones available in the U.S. and the U.K. and quickly sold out the first batch of about 1,000 devices in each country. In Europe, the devices were already on sale through Deutsche Telekom in Poland and Telefonica in Colombia, Spain and Venezuela.

Earlier this month, I got a chance to talk to Mozilla’s Principal Developer Evangelist Christian Heilmann to talk about what this project means for developers. The company also sent me a review unit of the ZTE Open.

As Heilmann stressed when I talked to him, the phone is meant to fill what Mozilla believes is a “massive gap in the mobile space.” Right now, the organization rightly argues, mobile connectivity to the web is only for “the rich people in the modern world.” Android and iOS devices aren’t even available in many parts of the world, and the fact that you often need a credit card to fully use them puts them out of reach for a large number of potential users, especially in developing countries. The ZTE Open (and Firefox OS itself) then, Heilmann noted, is targeted at a market that is not covered by other phones.

Eager to set my expectations right for when I received the phone, Heilmann likened it to a family sedan that we shouldn’t compare to an F1 car. After using the ZTE Open for a while, that’s definitely true in this case. It’s clearly an $80 phone, but as a device that is meant to bring web connectivity to people who don’t currently have it — or can’t afford it — it succeeds.

Given the price, it’s no surprise that it’s still a bit sluggish at times. Firefox OS itself also still needs some polish around many edges. The sluggishness especially shows when you use the virtual keyboard. It’s often not clear when you press a link in the browser, for example. 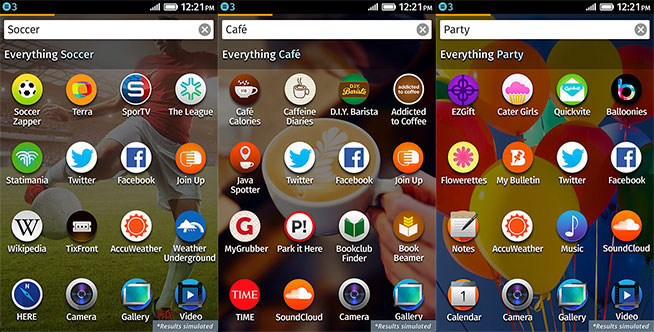 Still, thanks to its focus on web apps, it’s pretty straightforward to use Facebook and Twitter, manage your email and text messages or to listen to music or the radio (and, of course, make phone calls). Most mobile platforms don’t treat the web as a first-class citizen and they definitely don’t make it easy for developers to distribute their apps over the web. On Firefox OS, developers get two options for distributing their apps: they can do so from their own website or — as so-called “privileged apps” — through Mozilla’s marketplace. For security reasons, apps that are distributed outside of Mozilla’s store, however, don’t get full access to all of the device’s hardware features (geolocation, gyros, etc.). 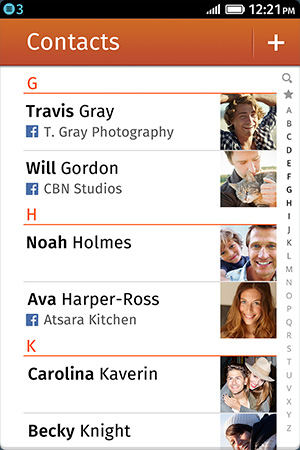 App discovery, by the way, is one of the cooler features of Firefox OS. Just swipe all the way to the left-most screen and you get a search bar. Type in something like “photography” and the screen will show you apps you already have installed on your device and a list of related service. For photography, this list includes the likes of Flickr, Picasa, Pinterest and Tumblr, for example. Type in “music” and you get links to SoundCloud, YouTube, Metro Lyrics, MTV, Last.fm and many others. Click on any of these, and you’re taken right to these service’s web apps. If you like them, just swipe up from the bottom of the screen to pin them to your home screen.

If you are a developer who wants to port existing mobile web apps to Firefox OS, the whole procedure is extremely easy and doesn’t involve much more than writing a manifesto to package it for Firefox OS. It’s so easy that when Heilmann reached out to those who had already done so, most weren’t really able to tell him much because it only took them a few minutes to do. Apps that want to use the platform to its full potential, of course, take a bit more work, but even there, the focus on HTML5, CSS and JavaScript opens the platform up to a wide range of developers who wouldn’t previously have considered writing apps for smartphones (similar to what Microsoft is doing with HTML5 on its Windows platform).

For many users, Mozilla hopes, Firefox OS will mark the first time they’ll use the open web on a phone. This is something developers should keep in mind as they design apps for the platform, Heilmann noted, as you can’t always expect that users are already familiar with all of the usage paradigms most of us have grown accustomed to over years of using touchscreen phones.

Overall then, the ZTE Open with Firefox is an interesting first look at the potential of Firefox OS. It’s not the world’s most amazing phone by a long shot, but I would never bet against the open web and with that at the core of Firefox OS, the operating system definitely has a chance to be successful in the long run.