Slice, the technology startup whose mission is to organize all commerce data by tapping into the information buried in your inbox, has closed on $23 million in Series B funding led by e-commerce giant Rakuten, often referred to as the Amazon of Japan. Also participating in the round were Siguler Guff’s Russia Partners and NPD Group, as well as previous investors, DCM, Eric Schmidt’s Innovation Endeavors and Lightspeed Venture Partners.

With the new investment, explains Slice CEO Scott Brady, the mission was to bring in different perspectives outside Silicon Valley. “We’ve got a very significant Asian company, and we’ve got a very significant European presence now. The goal was…to expand our thinking. But our core mission hasn’t changed. We’re still focused on organizing all the commerce people have,” he says. 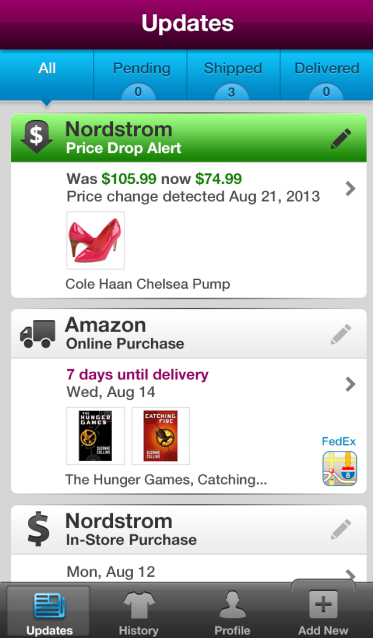 Founded in 2010, Slice debuted its first product, “All My Purchases” in May 2011 as an add-on for Yahoo Mail, allowing users to find all their order confirmations and receipts in one spot. The company’s technology has become a lot more sophisticated in the years since. The mobile version of Slice, which launched in late 2011, now offers a similar way to track your e-receipts, but also tracks packages, keeps an eye on your online spending, and watches for price drops so you can request a rebate, among other things. To date, the app has tracked over 90 million items for a total purchase value of nearly $3 billion.

This summer, the company expanded into another vertical with the debut of Goodreads competitor Slice Bookshelf, a social service for readers that digs into both your inbox and Facebook profile data to discover the books you’ve purchased and enjoyed, the latter based on Facebook Likes.

Brady sees Slice as something that plays in the same general space as Google Now, a product that digs into data from Google’s own set of services like Gmail, Calendar, Maps and search history to proactively alert users about information just when they need it. With Slice, however, the company has a narrower focus – commerce – but a potentially wider footprint as it can work cross-platform and cross-“inbox.”

In addition to building its own products in-house, a big part of Slice’s business is in licensing its data through an API. The company today is working with several large companies in various stages of experimentation and integrations, but is announcing that shopping discovery service TheFind is the first to publicly disclose its partnership with Slice. The shopping service has integrated Slice into its iPad app as well as on the web, allowing users to connect their inboxes to track their purchases and help power product recommendations. 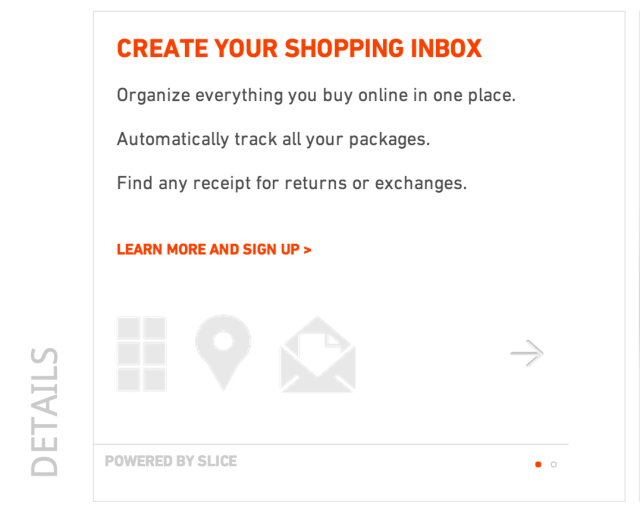 Though Slice to date has focused on e-commerce, Brady says that the technology has potential in offline commerce, plus payments, travel, finance, and more. For example, he envisions new services like a social app built around travel, where Slice could take every place you’ve been and plot it on a map automatically, or a financial app of some kind where people could better understand where, how and on what they spent their money. (You can see hints of this in today’s Slice app, but the company could choose to break that off into a standalone service the future.) 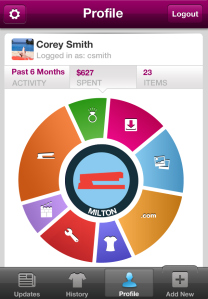 In terms of the Rakuten investment, however, there’s an obvious potential in helping power online recommendations in the company’s own product suite, including its e-commerce site, but potentially other products as well – like its Netflix competitor Wuaki, for example. But Brady says Rakuten is not an API partner today.

Up Next: A New Slice App Before The Holidays

More immediately, Slice’s focus is on product development, with plans to ship a more interactive version of its flagship app by the holidays with features consumers have been demanding. Brady won’t disclose what these may be, but an iPad-optimized version is an obvious next step.

The company will also continue hiring, especially on the product and data side of the business. Today, the Palo Alto-based startup has 50 full-time employees, mostly engineers, and several data scientists.

Ultimately, Brady believes that if Slice’s technology reaches the point where it’s looking into people’s email inboxes around the globe, the company could create a replica of the point-of-sale systems from every major merchant worldwide. “Whoever can aggregate this information at scale is creating what I think is one of the most valuable information sets in the world,” says Brady. “I think it’s going to drive personalization, it’s going to drive advertising, and offer generation.”

To make all this work, of course, Slice will have to be careful not to creep out consumers, who have grown more sensitive to – and wary of – being tracked. To make sure it doesn’t cross any lines, Brady says that everything Slice offers is opt-in, and useful to consumers. “All this data is in the cloud already – our challenge is creating great experiences for the information you already have.”