The software package that comes with the Form 1 3D printer, which I reviewed a few months ago, has gotten a much-needed update. First, the new software, called PreForm is now compatible with OS X, which means more users can use the system natively on their machines.

The new software also supports automatic mesh repair using software from NetFabb. Writes Sam Jacoby of Formlabs: “PreForm’s mesh repair tool integrates software from Netfabb to examine the triangle meshes that make up your digital design. It will automatically clean up artifacts, close triangles, and join vertices, so that your models will print reliably on the Form 1.” This means prints will be far smoother than they were in earlier versions of the software.

I’ve used the OS X version of PreForm and found it to work flawlessly on Macs. PreForm creates a lattice structure that allows you to print objects using the Form 1’s unique technology and then slices the object up for proper printing. While it’s not a formal editor, it does allow you to scale and modify some models before printing. On August 6 Form Labs released an update that allowed users to estimate print time. 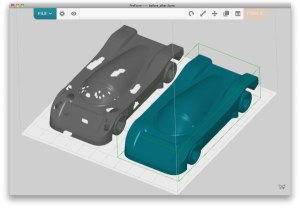