There are myriad video on-demand and movie-streaming services in the U.K., from big hitters such as Amazon-owned Lovefilm, to lesser-known brands such as DSG’s KnowHow. In fact, so crowded is the space, you’d be forgiven for thinking that VOD is a commodity business. Except that the movie catalogs — and in some cases prices — that these services are able to offer vary greatly, with those companies with the deepest pockets sometimes picking up content on an exclusive basis. Plus each service operates within the context of arcane distribution models based on predefined ‘release’ windows that see movie studios dictate when new releases eventually make their way to on-demand and movie subscription-based streaming or free-to-view.

Movie fans don’t care about that stuff, of course. They just want an easy way to discover, find and watch movies they’ll enjoy, no matter on what online service they are made available. Enter Tank Top Movies, which launches today to help U.K. movie watchers do just that. Part search engine, part movie recommendation engine, the company, backed by Telefonica’s Wayra startup accelerator, lets users search across 18 movie services in the U.K., add movies to a unified ‘watch list,’ be alerted when movies become available, and click through to begin watching. 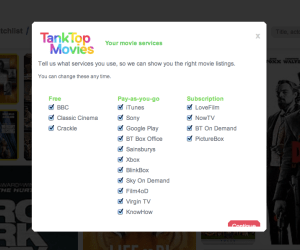 “If you want to watch a movie at home tonight in the U.K., there are around 13,000 different films to choose from, and at least 20 different legal services,” says Tank Top Movies co-founder Liz Rice, who noted that each service licenses different content, and have different commercial models — free to view, subscription, and pay-as-you-go. “As users, we thought it was crazy that a relaxing evening watching a movie would be preceded by 20 minutes of tedious searching around to see what’s playing on the different services we use, cross-checking with sites like Rotten Tomatoes to see whether the films are any good. In most cases, the on-demand film services really don’t offer a great user experience for browsing what’s on.”

It was faced with this problem that the founding team — members of which have previously worked at Skype, Last.fm, Just-Eat and Metaswitch Networks — decided to build a service that consolidated the experience. “With Tank Top Movies we’re aiming for ‘serendipitous discovery,'” says Rice. “We use various factors, including critic and user ratings, recency and your previous choices to create a personalized list that’s fun to browse, where we hope you’ll quickly find something you’d like to watch, from across the services you use. You can build a watchlist for keeping track of the films you want to see, and if you missed a film at the cinema, we can notify you as soon as it’s out on one of the on-demand services you use.”

Rice says the company is also trialling widgets for film websites, “so that any film blogger or publisher can connect their readers directly with the film they’re writing about.”

Tank Top Movies makes money from any available affiliate revenue generated from the leads it produces, though the primary business model is a more ambitious data play: It wants to help the film industry better understand their audience by selling aggregated viewer behaviour and preferences back to them — but only when, and if, it’s able to reach enough scale to be in a position to do so.

All of which hasn’t gone unnoticed by other players in the industry, not least Netflix which pulled the plug on Tank Top Movies earlier this month, meaning that the startup is unable to list Netflix’s content in its index. It’s easy to presume that the movie streaming giant wasn’t too keen on a service that enabled users to compare competing offerings so transparently, though I suspect it was Tank Top’s universal watch list feature that likely caused the fall out.

“It’s disappointing that Netflix asked to be removed, and it’s strange because you’d think that any on-demand movie service would be happy to receive visitors looking for a film that they can watch on that service,” says Rice, adding that Netflix appears to tolerate similar functionality offered by Fan TV in the U.S.

“Fortunately there are plenty of other streaming services in this country, and in fact Netflix were only the fifth most popular on our site in terms of clicking out to movies, so it hasn’t caused too much disruption to the majority of our users.”