Anyone who’s ever gone through the ordeal of buying a house knows that it’s an extremely complicated process. But now there’s a tool, called Closing Time, designed to simplify all the work that needs to be done. And now the product, which creates a comprehensive to-do list for home buyers, is available for users all over the U.S.

Closing Time is the first product to come out of Amitree, a startup founded by Jonathan Aizen and Paul Knegten, the guys behind display-ad company Dapper. After that company had been acquired by Yahoo in 2010, the two wanted to do something a little different. And real estate seemed like the perfect place to start. That’s because they’ve run into their own pain points when trying to buy and close on a house.

To solve that problem, the two built an abstract rule engine designed to take into account all the different things a home buyer has to do between the time when he or she is in contract all the way to picking up the keys. It works by asking the user a series of questions at the start to see where they are in the process of closing, and to determine which things need to be done and in what order. 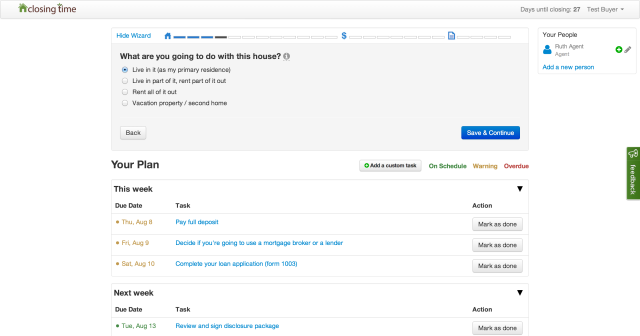 Closing Time then creates a to-do list, which users can peruse on the web and check off as they complete tasks. It also emails them daily with tasks that need to be done each day, and again once on the weekend to provide a preview of what’s coming up later in the week. The tool can also be used for buyers to connect with their agents and to nudge them when the agent needs to complete a task.

Keeping you in touch with your agent and mortgage lender isn’t just a feature of the app — it’s also the way that Closing Time will be making money. If you don’t have an agent, Closing Time will help you find one. Same goes for a mortgage lender. And since those are highly qualified leads, they’re also highly valuable. The app is also relying on agents to get users signed up in order to broaden the tool’s use.

After a test run in the San Francisco Bay Area, following local rules and regulations, the web app is now ready for use throughout the U.S. Since rules and regulations vary state-to-state and even city-to-city, making Closing Time available to the entire country was no small feat.

The good news is that the rule engine was built to be malleable based on what steps are needed to be completed, and those steps can be changed based on a user’s location or location of the home he or she is buying. The bad news is that it took some time to get all of the local regulations from various places around the country and to create rules in the app around them.

But now rejoice! That work is done.