Tumblr is claiming that it was an infrastructure failure, and not a “hack,” which caused seemingly random posts to appear on a number of users’ blogs. The issue, which was reported widely on both Twitter and through Tumblr blog posts from affected users, saw posts that users themselves had not created showing up on their personal blogs. These ranged from more innocuous items, like photos from picture-sharing site We Heart It, to seriously “NSFW” content, including pornography.

According to a Tumblr spokesperson, the issue was not one involving an outside attack of some sort. Instead, the company explains the problem was of a more technical nature:

Earlier this morning, an infrastructure failure lasting roughly fifteen minutes led posts created in this window to become corrupt. No data was lost, but this has been causing inconsistent behavior for these affected blogs. Our engineering team is working quickly to correct the situation.

What made the situation worse, was that some users said that they couldn’t log into their dashboards or delete the errant posts after realizing their blogs had become compromised. This, in turn, led to reports that Tumblr may have even been hacked, a theory put forward by TechRadar for example, which was among the first to report the news.  According to that post, Tumblr had put out a tweet stating that the company was working to “quickly to remedy performance problems with some blogs.” More recently, the company posted an tweet confirming that users’ blogs had been affected and the issue was being addressed:

Our engineering team is working quickly to repair an issue causing incorrect posts to appear on a small number of affected blogs.

Our engineering team is working quickly to repair an issue causing incorrect posts to appear on a small number of affected blogs.

Tumblr users also reported to TechCrunch that the site was down around 9 hours ago, and others have posted complaints about the length of the outage, one noting for example, that Tumblr’s public response came around 12 hours after the problems were being reported. The issue appearing to be ongoing, and Tumblr has not provided an ETA to a fix at this time.

Affected users weren’t just seeing one odd post on their blogs, but in many cases, three or even four. Users are saying they still can’t delete these posts at this time. 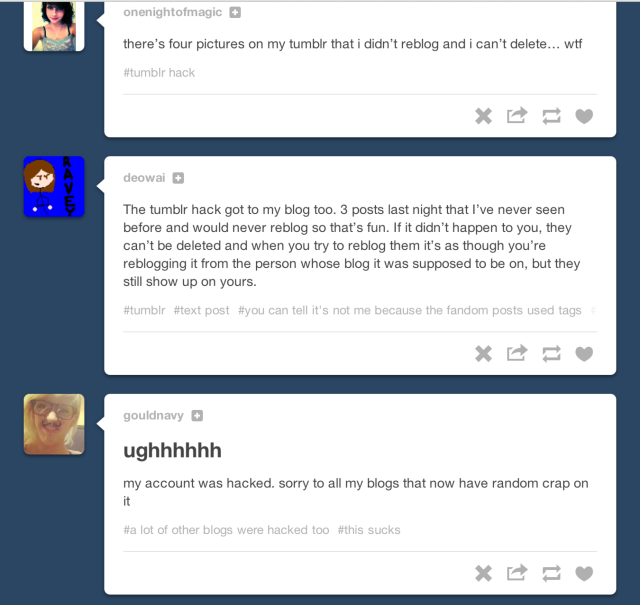 Though not a hack, the technical issue is concerning because of the nature of the content posted to some users’ blogs. Tumblr has a reputation for permitting adult content, which means that when the glitch occurred some of those NSFW posts were published to other users’ blogs. Some users also have their blog posts automatically shared to Facebook and Twitter, too, which makes the problem more public for them.

It’s also damaging for Tumblr’s brand, as the company is now trying to convince advertisers to create their own Tumblr blogs and posts in an effort to monetize the Tumblr user base. The now Yahoo-owned blog platform has been carefully implementing features which would allow that branded content to appear in users’ searches and dashboards, but not in situations where it would appear anywhere near the adult material on Tumblr.

This ongoing technical issue is an example of the problems that can arise from establishing a platform that’s home to NSFW material, while still trying to appeal to image-conscious brands. That is, advertisers’ Tumblr sites could have been affected by a glitch like this, though we haven’t yet heard that any were this time. 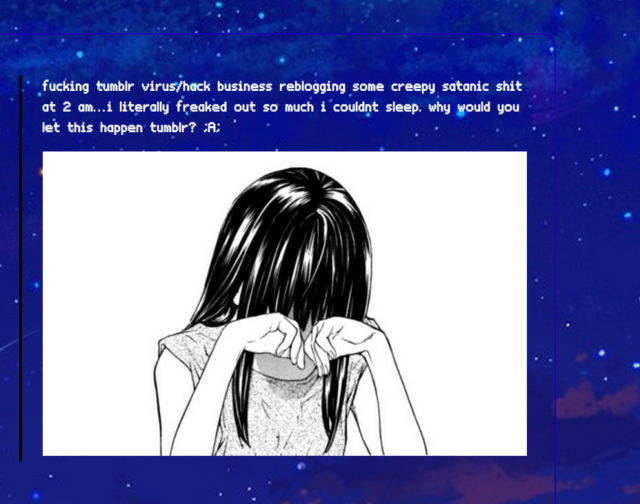