When LinkedIn acquired newsreader Pulse earlier this year for $90 million, it said the Pulse apps would remain and the two companies would instead find ways to work together. Today, LinkedIn continues to make good on those promises with an update to the Pulse mobile apps on both iOS and Android, which introduce improvements to search, discovery and recommendations.

This is one of many updates the Pulse app has received since becoming a part of LinkedIn. Throughout the spring and summer, for example, Pulse has seen other, minor releases that have allowed users to share stories directly from the app to LinkedIn, as well as save stories in “read later” services like Evernote, Pocket and Instapaper, among other things.

With today’s update, Pulse has redesigned the user experience in an effort to make it easier for users to find new publications, channels and people to read, via a series of changes that include things like the ability to preview a source before adding it, as well as a new optimized search experience. Pulse’s search is similar in some ways to competitor Flipboard, as it doesn’t only search for articles, but also content from around social media sites and the wider web, including Google, YouTube, Facebook and Tumblr, for example.

Now, the app allows users to search by general interest as well, in order to find relevant publications to subscribe to in Pulse. The app will also offer a curated section of editorially chosen recommendations that are featured at the top of its content catalog, much like Flipboard does with its “Flipboard Picks.” 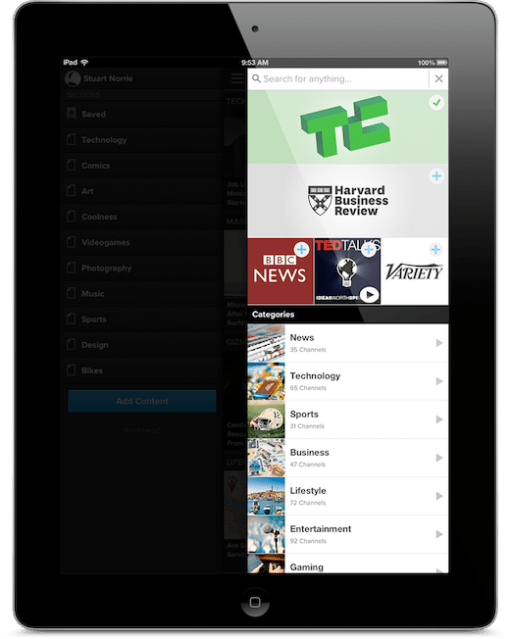 LinkedIn declined to share the number of active users in Pulse, but says the app has been “activated” by more than 30 million users, which is the same number reported at the time of the acquisition in April. The number of Pulse publishers hasn’t changed, either, at least by official counts, which still place it at 750+.

In addition, the company also isn’t providing much of a roadmap in terms of how LinkedIn and Pulse will be further integrated in the future, but there are some places where it would make sense. This includes, of course, the company’s home for news reading with “LinkedIn Today,” which helps to surface stories about users’ personal and professional interests. One could imagine that taste preferences, bookmarks and subscriptions would be able to flow back and forth between the Pulse app and LinkedIn Today at some point, perhaps.

The updated Pulse mobile apps are live now in Google Play and iTunes.