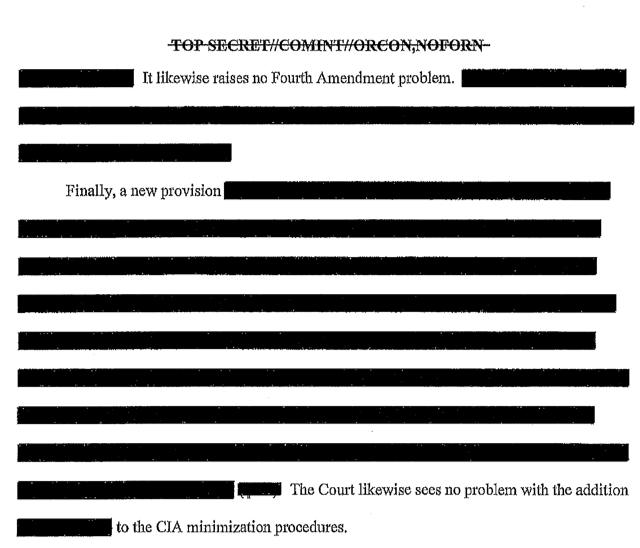 Two new fun facts today regarding America’s surveillance state: the National Security Agency was collecting hundreds of millions of communications up until 2011, but a military court stopped them.

In a recently declassified and heavily redacted court order, the Foreign Intelligence Surveillance Court (FISC) ruled that a potentially defunct mass email snooping program violated the 4th Amendment. “The court is unable to find that NSA’s targeting and minimization procedures, as the government proposes to implement them in connection with MCTs [Multi-Communication Transactions], are consistent with the 4th amendment.”

In the course of sweeping up communications directly from fiber-optic cables, including screenshots of emails, the government can inadvertently view the communications of Americans who are not suspected of terrorism. These “multi-communication transactions” disturbed the court enough to supposedly shut down a program that was reading the content of emails, not just the records (so-called “metadata”).

Judge John D. Bates found that the government “advised the court that the volume and nature of the information it has been collecting is fundamentally different from what the court had been led to believe.” In other words, the NSA was either ignorantly or willfully misleading the court charged with limiting its power.

While this is evidence that FISC does in fact have some meaningful oversight, it apparently can take a while for the court to exercise its power. It’s actually good news that the government can exercise restraint over spy agencies, but it’s disturbing how long it takes.