Samsung is more similar to iOS than to other Android makers in many ways when it comes to user demographics, new research from Flurry shows. Samsung users are more likely to use both smartphone and tablet apps vs. the Android average, and also tend to fit in demographics that advertisers are more fond of. 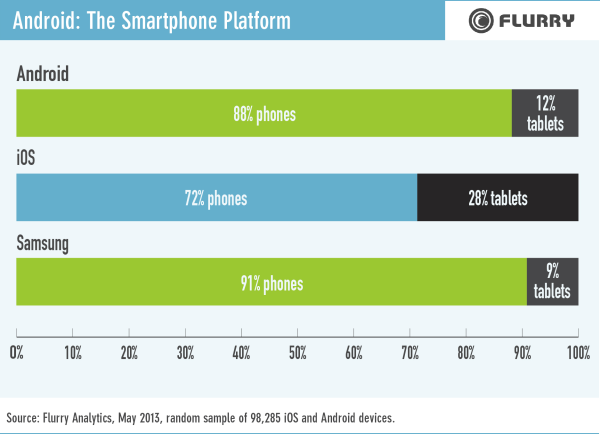 Owners of Samsung gear were much more likely to fit so-called “personas” that aggregate different character traits that are appealing to advertisers than other Android users, too, Flurry found. They were much more likely than average to be business and leisure travellers, gamers, sports fans, value shopper, gadget enthusiasts and other spend-happy personality types, according to a study that covered over 45,000 Android devices.

One area where Samsung lagged its fellow Android OEMs was in terms of the percentage of its users that were tablet owners. 91 percent of Samsung device owners had phones, vs. just 9 percent for tables, while with the rest of the Android crowd it was 88 percent phones to 12 percent tablets. Both were blown away by Apple, however, which saw 72 percent of its iOS usage on phones, and 28 percent on tablets according to Flurry’s numbers.

Samsung is owning the Android smartphone market, and doing so in a way that’s helping it capitalize on growth in both the top and the low end of the income spectrum with a range of devices, while winning over the users that advertisers and developers find most attractive. That means that its upcoming global developer conference will likely be a very popular event. It also means that Samsung is becoming an even greater threat to Apple, not because of just market share, but because of demographic appeal, too, which could have a significant effect on the app ecosystem and mobile ad revenue balance.