It used to be if you wanted to get food delivered, you had to pick up the phone and call a place. Then you could go online and place an order direct through the Interwebs. Now people will be able to use their phones again, as Baltimore-based OrderUp is launching a native mobile app that will help its customers find local restaurants that do take out and delivery, even if they’re not in a big, gigantic city.

The OrderUp app will be available for iOS and Android devices, letting hungry customers pick their favorite meals from a variety of different restaurants. The launch of the mobile app came after the company already received a lot of interest from users on their mobile phones — co-founder and CEO Chris Jeffery said about 25 percent of users were on mobile web already.

Of course, there’s no shortage of competition in markets like San Francisco or New York City. Even besides industry stalwarts like like Seamless or Grubhub, it seems like every day I come across a new app or startup that’s gonna bring me lunch in 10 minutes or less. And that’s precisely why OrderUp is focused more on connecting hungry people in secondary and tertiary markets. 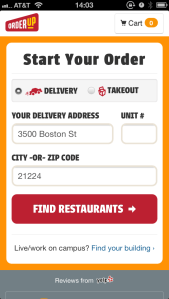 Unlike other online and mobile delivery companies, OrderUp doesn’t go after the fragmented market of local vendors directly, but instead has a franchise model for its service. It recruits local franchisees, who then work with restaurants in their hometown market to get them signed up, on-boarded, and making deliveries. Those people are also responsible for local marketing of the app and local restaurants in their towns.

Today, OrderUp is available in just over 25 American cities, including places in Alabama, California, Colorado, Arizona, Indiana, Kansas, Maryland, Missouri, New York, New Jersey, Pennsylvania, North Carolina, Virginia, Oregon, and West Virginia. It plans to expand into 45 new markets in the coming months, and has local franchise owners signed up to do so. That first of which is Indianapolis, Ind. where the service just launched.

In each local area, OrderUp has an average of about 40 restaurants per city. As it continues to expand, it expects that it’ll have 50 or more per. Even while it’s looking to add local merchants, the startup still wants to maintain the quality of restaurants that sign up. So it’s not accepting any and every nearby takeout or delivery joint in these towns.