Facebook doesn’t want you to ever leave its apps, not even to switch what song you’re listening to. So it’s began letting its Android app beta testers who’ve enabled Home to control Spotify, Google Play Music, Pandora, and Rdio from a notification at the top of cover feed. If popular, it could roll out to all Cover Feed users, keep users on Facebook more consistently, and get them to share their music listening habits more frequently.

Other new features in the most recent two beta versions of the Android app include animated stickers, the ability to cancel photo uploads, and buttons to Like and comment on Page recommendations.

To be eligible for this feature, you have to follow these instructions to join the Google+ or Google Group for Facebook’s Android beta testers, then opt in to being a tester, and download the newest version of the Facebook For Android app.

Facebook for Android beta testers who’ve turned on Home’s Cover Feed will see a double-tall notifications on Cover Feed that shows the artist and song they’re listening to overlaid on some album artwork. They can tap that notification to reveal buttons to pause the music, or skip to the next or previous song.

Facebook opened its Android beta testers program in late June to let hardcore users volunteer as guinea pigs for potential Facebook features. Facebook’s goal is see which features are popular enough to warrant a spot in their main apps and squash any bugs before rolling out features to its hundreds of millions of mobile users. 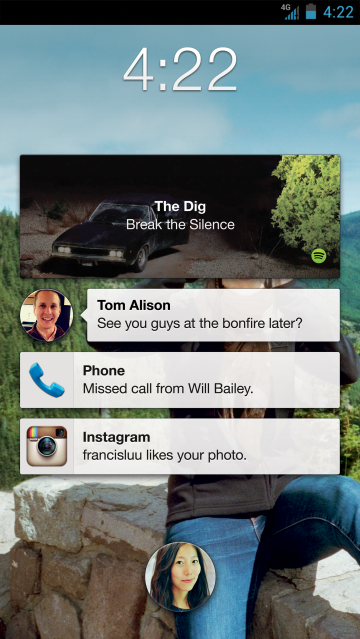