OK, so there are now Ubers-for laundry, house cleaning, dog walking, and I’ve heard rumors of an Uber-for-pedicures, although I cannot confirm at this time that such a thing exists.

But, in another spin on the growing number of startups that build services on-demand, YC is graduating an Uber-for-flowers startup this summer called Bloomthat.

They promise to deliver flowers to anywhere in San Francisco in less than 90 minutes. And yes, it works.

You pick one of four bouquets or a succulent, which cost $35, submit your billing details and a destination. Voila! About 90 minutes later, a courier will show up at the desired point bearing a bouquet in a burlap sack. The photo below is of an actual bouquet of dahlias I had delivered a few days ago.

There is also a florist’s choice bouquet for $45. 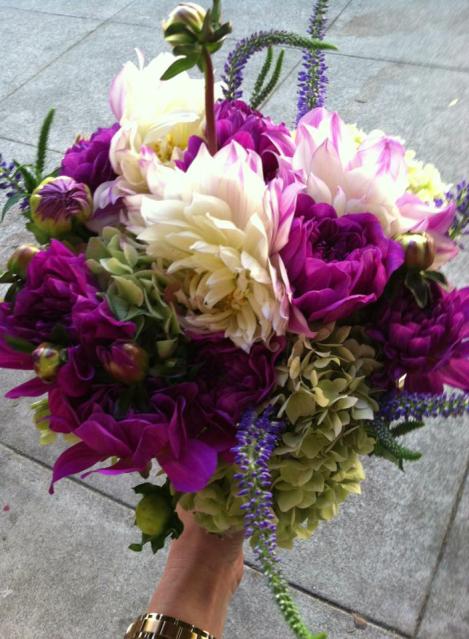 So really, how big could the Uber-for-flowers market be?

Bloomthat’s co-founder Matthew Schwab says the cut flower market is $8 billion nationally and that competitors like FTD, Teleflora and 1-800 Flowers aren’t adapting quickly enough for people to order flowers on demand from their phones.

“Basically our hypothesis is if we offered a better product that’s faster, we’d get people to send flowers more often,” he said.

Indeed, while there are your typical use cases like boyfriend-forgets-anniversary or apologizing for doing something terrible, there are many other ways you could use Bloomthat. One intrepid friend of mine suggested: “Find two people you think clearly should be banging and send them each flowers addressed from the other.”

There is also a succulent plant in the mix because Bloomthat learned that their customers wanted to send plants that they felt were more appropriate for men. So you can send office or desk plants too.

Like many other logistics-heavy startups like Instacart and Exec, Bloomthat relies on outside contractors. They work with local florists to design a set of products and bouquets for the season and hire local couriers. This will make it easier for them to scale to many urban markets across the U.S. quickly.

They also say that their leg-up on other potential competitors like delivery startup Postmates is that they only do flowers. Each bouquet comes wrapped in a branded burlap sack with a card. The company sticks to Zappos CEO Tony Hsieh’s mantra of “delivering happiness” to customers. And in the case of flowers, that’s absolutely true.

“With Bloomthat, I can send flowers because it’s Tuesday and in that moment, I can make a girl’s day immediately,” Schwab said.

Unlike many of the YC startups in this batch, this was the idea that Schwab and co-founders David Bladow and Chad Powell pitched the early-stage firm on. They had already actually been running it for a few months. They have grown their revenue by tenfold in the past three months and about 40 percent of Bloomthat’s customers order twice within the following 60 days.

A subscription-based model is something that they would eventually put in place, but they’re focusing on the customer experience around instant deliveries at the moment. Presumably, they could get the costs lower if they had a subscription model because they would have predictable delivery routes.