I suspect that you spend quite a large percentage of your life typing. Before work over email, on your smartphone during your commute, on your main computer at work, after work trying to find something on Netflix, and so on. It’s part of our daily flow, week in and month out.

Given that the thing we touch more than anything else is a set of keys that we must press thousands of times per day, having a well-designed keyboard is a worthy investment. Too many people execute their toil with bad hardware. My general preference rests with large, mechanical gaming keyboards, as they sound lovely and you can really fly on them.

There is a rival school of thought for power typers: ergonomically shaped keyboards. You’ve seen them with their middle humps and spread keys. They are the opposite of Apple’s vision, for example.

However, ergonomic keyboards are generally somewhat plain affairs. Plain in the sense that they are not pretty. But there is something to be said for keyboards that are designed to fit your hands and the natural bent of your arms: They feel great.

Preamble aside, Microsoft has a new keyboard coming out in two days that is quite nice. I rarely get my hackles too raised over forthcoming peripherals, but in this case the Sculpt Ergonomic Desktop keyboard (we’ll just call it the Sculpt) is something that I found attractive and a pleasure to type on. I never expected to put aside my Razer Blackwidow, but here we are. Moving from a straight keyboard to the flexed Sculpt, I regained the ability to bang right along on the new set of keys in under an hour. There are still occasional mistakes at the fault of my mind slipping back into old patterns, but that is a small issue.

A Microsoft glamour shot of the machine: 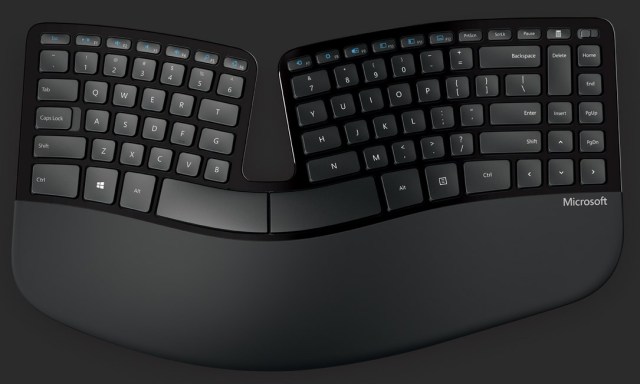 And an iPhone snap from this morning (sorry, Biggs):

The Sculpt is wireless, but doesn’t lean on Bluetooth, so you won’t have that particular nightmare.

When it goes on sale later this week, the Sculpt will retail for $129 as part of a three-part bundle: Mouse, keyboard, and detached num pad. The num pad is simple enough to not warrant notice, The mouse is a bulbous affair, designed to raise your hand off the desk — thus preventing you from resting your inner wrist on the table — and rotating your hand to a more natural position.

However, as you likely expected, it’s the keyboard part of the package that is worth noting. During a meeting with Microsoft I dubbed it the Macbook Air of keyboards. I’m not sure they’ll pick that up as its tagline, but I’d recommend it. The keyboard will also be sold outside of the bundle for around $80.

The Sculpt does have a single drawback: It doesn’t have the key action that I am accustomed to. By that I mean that the action of pressing a key doesn’t make you grin, as it does with a proper mechanical keyboard (ask your local nerd to play with their keys, you will then understand).

During the early days of the Surface project, that Microsoft was becoming an OEM was big news. Big news that was slightly wrong. It has built peripherals since time immemorial. And the Sculpt keyboard is its best keyboard yet. I’m going to main it for a few days, and then switch back to my mechanical setup for a direct comparison. Still, I’m not in a hurry to send it back to Microsoft and revert to my former setup.

Microsoft is a company in transition, growing new business units as its core Windows work slips in a slowing PC market. The peripheral team, however, is ticking right along.