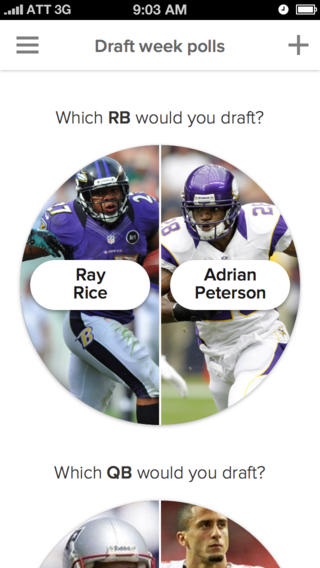 The company, which just hired a new CEO away from Crowdstar and raised $2 million in its last round, hacked together a simple social app called “Fantasy Football Polls.”

The app itself is super spare and simple. You can easily create a poll between two NFL players and ask followers or friends who the better pick will be for your fantasy football team. Users get points if they guess the more popular player in the poll.

The company’s hoping to capitalize on the upcoming football season, which is just a few weeks away. In fantasy football, fans pretend to be general managers of virtual football teams that use real NFL players. Every week, they try to draft and make trades with different players. But Hitpost’s polling app helps keep fans thinking about fantasy football every day.

“This is a way to keep fantasy players engaged throughout the week,” said Aaron Krane, who is the company’s chairman and co-founder.

It also pairs well with the company’s other app, Sports Bet, which is an app that lets friends make bets with virtual currency on basketball, hockey, baseball, football and soccer games. While players can buy virtual currency to make wagers, they can’t cash out, so it doesn’t violate any real-money gaming regulations in the U.S. Krane said the company has yet to become cash flow profitable off virtual currency transactions in its games.

Krane, who has a background in social gaming from working at early Facebook developer Slide, started the company as a way to apply mechanics from the gaming world to sports and find an unexploited sweet spot between freemium titles like Zynga Poker and sports media. With that angle, they raised $2 million in a round led by Floodgate in April of last year.