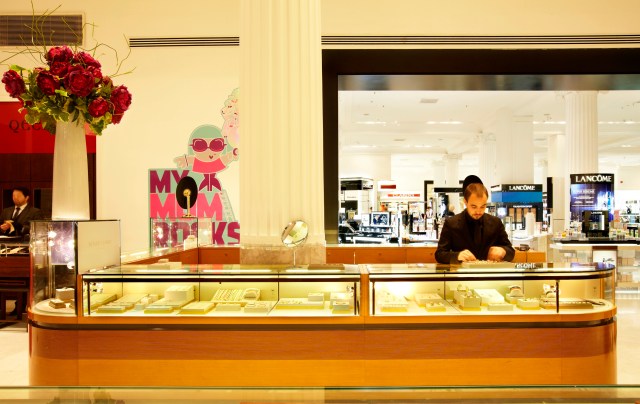 As a consumer, online-native luxury brands mess with my feelings. On the one hand I tell myself, “Hey, I’m a modern woman. I believe in the power of minimizing overhead!” But when push comes to shove, I want to feel the quality of that leather or wool in your hands. Check the stability of the heel. Because as with OkCupid, true love happens in person, and even Forever21 photographs well in advertisements.

Even for clothing and accessories brands that gain an outstanding amount of traction online, an offline presence will often follow, even when the company is still quite young. Here’s a look at four labels, both high end and more affordable, that began online but are using a brick-and-mortar presence to give weight and credibility to their brands.

Astley Clarke: Founded in 2006, the British luxury jewelry retailer Astley Clarke began as a multi-brand retailer before transitioning to focus on growing its own label, which is what it is best known for today. For Astley Clarke, which already has concessions in London department stores Harrods, Liberty, and Selfridges, moving offline is part of a broader expansion, which also includes online markets overseas.

Scott Thomson, Astley Clarke’s managing director and a recent hire to oversee the expansion, told me that the plan is to open a UK flagship store in 2015 and one in New York in 2016. The company will also be selling through 15 more UK stores by the fall, with the hope of getting on the counters of stateside department stores like Bergdorf Goodman by early spring 2014. Concessions, he said, help to cement the brand offline.

“Creating a brand in a digital space requires a clear set of skills, offline it requires exceptional execution,” Thomson said. “The service to the retailers and consumers, staff training, attention to detail, quality of props and in store branding all have to be excellent. Online is about managing a space the size of your screen, in the physical world there are many more moving parts and you have to have to be looking behind you as well as in front.”

Thomson said that down the line, Astley Clarke wants to ensure that at least 40% of its product is sold globally online, as compared to the less than 5% of luxury jewelry that is purchased online in the industry overall. 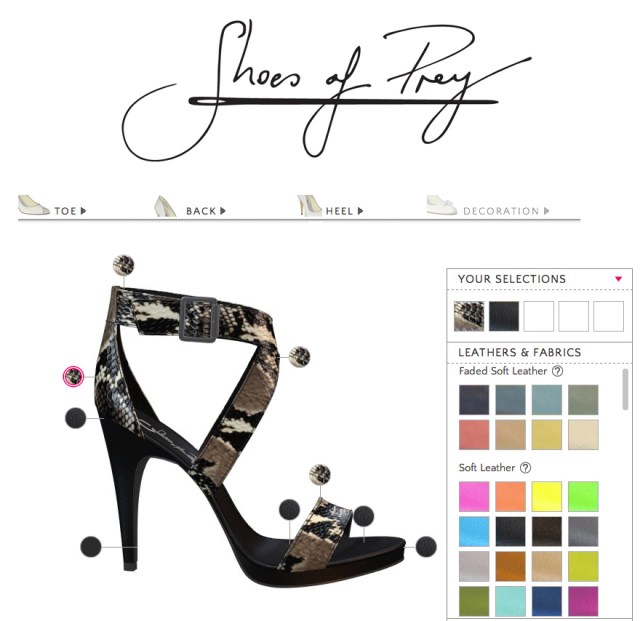 Shoes of Prey: Like so many start-ups, Sydney-based site Shoes of Prey was conceived when co-founder Jodie Fox got fed up with not being able to find a truly perfect pair of shoes. Customers use a 3D modeler to customize a shoe’s color, material, and style for a total of, as they advertise, 190 trillion possible iterations. I’m not going to double check the math on that, but the point is customization, which is a design model best delivered online.

Six months ago Shoes of Prey opened its first flagship store in Sydney, along with a few pop-up shops in Japan. The tactile element of shopping is still key, Fox told me, and having a brick-and-mortar presence solves the problem of people asking what their shoes would look like in real life. But because the shoes are custom-made, Shoes of Prey approached its offline branding as a kind of fantasy workshop.

Customers sit around a table on stools made out of black silk and patent leather, where they can use the store’s iPads to design their own shoes. Shoes are available for fit, and leather samples are kept on hand for reference.

“It’s not a traditional store at all. We built a retail store out of everything a shoe is made of,” Fox said. “In the middle of the table, there’s a two meter high sculpture of shoes. I wanted people to see the product but it’s not about pulling it off a shelf. It fosters creativity so people feel inspired and open up their minds a bit.”

Bonobos: Like Shoes of Prey, the menswear brand Bonobos created its brick-and-mortar Guideshops as alternative retail spaces. Customers book an appointment with a personal shopper/”Guide,” who takes them through the collection and helps them find the right fit. There is no inventory on location, so when you order in-store the merchandise is shipped from Bonobos’ warehouse as though it had been bought online.

The Guideshops are brilliant for a number of reasons, the first being that every customer feels like they’re being given VIP treatment. You’re basically David Beckham walking into an Armani store after hours. For guys who don’t like to try on clothes, it’s an efficient way to figure out what works best and order that online forever.

The second reason is that for all the plushy brand appeal they generate, Guideshops are relatively cheap to run, with their small footprints and smaller staffs. Bonobos is looking to put down more locations nationally through the year.

Esteban Cortazar: For the designer Esteban Cortazar, online was an opportunity for rebirth. Cortazar shuttered his namesake brand when he went to work as Creative Director of the Emanuel Ungaro, but when he left the fashion house three years later at age 26, he largely went off the grid. In 2012, he relaunched his eponymous line through Net-A-Porter and has since gone on to design a second 18-piece capsule collection for the e-tailer.

In addition to giving him a wide customer base from the onset and negating the need for a runway presentation, Net-a-Porter has supported Cortazar financially. And as the designer told Business of Fashion, the site places orders based on his sketches, cutting out the need to produce samples. Though Cortazar’s collection hasn’t moved offline yet, he has had interest from retailers and plans to go independent of Net-a-Porter in the future. Whether he goes old school with runway shows and standard industry production cycles or runs his brand with blend of offline and e-commerce practices remains to be seen.