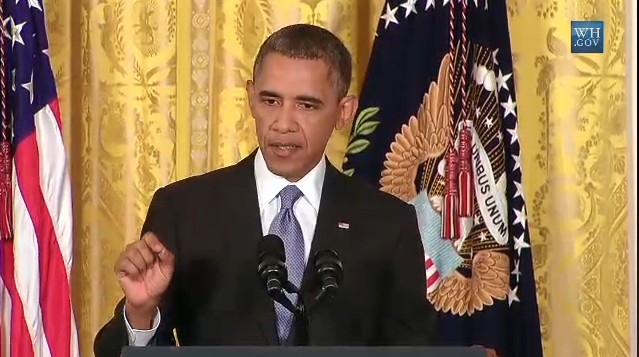 President Obama announced a series of new reforms to increase public confidence in the National Security Agency’s controversial Internet and telephone surveillance program. The press conference (live at whitehouse.gov/live) is still on-going. Here are the 4 reforms he’s proposed. All are quite vague:

1). “Pursue appropriate reforms” around section 215 of the Patriot Act, which authorizes the NSA to conduct surveillance. According to The Guardian, The NSA interprets section 215 to mean that it can broadly monitor Internet and phone communications. It is not clear whether the NSA has the ability to actually read any of the emails, social network communications, browsing behavior, or call records without a warrant.

2). Create a public advocate to argue in front of the secret court that grants the NSA authority to target suspects (both foreign and domestic). A number of critics have called the secret court, the Foreign Intelligence Surveillance Court (FISC), a “rubber stamp” because it’s only rejected 0.03 % of spy requests. A number of Congressman, including Steve Cohen, were considering legislation to create a public advocate who would argue for civil liberties within the Court.

“One of the concerns that people raise is that a judge reviewing a request from the government to conduct programmatic surveillance only hears one side of the story, may tilt it too far in favor of security, may not pay enough attention to liberty,” admitted Obama.

3). Create a website detailing what the NSA does–and does not–collect on Americans and foreigners. “We can and must be more transparent. So I’ve directed the intelligence community to make public as much information about these programs as possible.”

4). Create an independent agency that reviews cybersecurity processes and produces timely reports. One is supposed to be out by the end of the year.

“I’m tasking this independent group to step back and review our capabilities, particularly our surveillance technologies, and they’ll consider how we can maintain the trust of the people, how we can make sure that there absolutely is no abuse in terms of how these surveillance technologies are used, ask how surveillance impacts our foreign policy, particularly in an age when more and more information is becoming public. And they will provide an interim report in 60 days and a final report by the end of this year, so that we can move forward with a better understanding of how these programs impact our security, our privacy and our foreign policy.”

It should also be noted that Obama said, “No, I do not think Mr. Snowden is a patriot.”

If you’re frustrated by this lack of detail, you’re not alone. He still has not answered the most pressing questions about why its ok to broadly spy on Americans, or any of the details surrounding the leaks. Hopefully those will be answered with this reforms.