If you thought stickers were the pinnacle of human digital communications then you obviously haven’t seen enough animated GIFs. Messaging app network Pinger has launched a new standalone iOS app — the first of many it plans to cook up — that combines Vine-esque video loops with Snapchat-style ephemera so you can communicate in goofy gestures that disappear faster than your hangover. Analyse that, NSA.

GIF Chat lets people turn a video snippet into a looped, animated GIF, offering the ability to speed up or slow down the snippet for comic effect, and/or add text on top (or not). The app also lets you choose the number of loops the recipient gets to see before the message vanishes into the cyber ether, a la Snapchat. GIF Chatters set the lifespan of a message, from one or a handful of loops — or limitless loops if you really want your gurning face to leave a more lasting legacy.

Sending goofy video messages of your facial features doing silly things in slow-motion is part of what Pinger is dubbing “messaging 2.0” — a moniker for the rise of social messaging platforms such as Japan’s Line and China’s WeChat. Pinger’s thesis is this second wave of over-the-top messaging apps is all about making communicating fun, rather than just focusing on making it free  vs metered carrier talk and text plans — arguing that free OTT messaging was never that disruptive to the U.S. market anyway, thanks to local carrier economics.

“Messaging 1.0 was about replicating the function of my native application with different economics but what’s clear is now that everyone’s got a smartphone — now that I can assume I own the client on both sides — there’s all sorts of stuff you can do,” says Pinger co-founder Greg Woock. “It’s about exploring what new things can we do?” 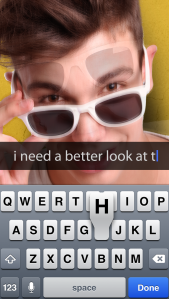 GIF Chat is just the first of a swathe of standalone messaging apps Pinger’s got planned — which will mess around with audio, video and other multimedia components, plus things like location, say the co-founders. It’s not giving out specific details of all the other apps yet but two incoming over the next few days are JukeVox: a voice messaging app that lets users record voice messages and add sound effects; and FreeStyle: a texting app that lets users customise  fonts, colours, background and more.

Expect Pinger to fire forth a whole barrage of iterated messaging ideas to see which ones stick. Growing its mostly U.S.-based network of users internationally is a focus, Woock tells TechCrunch, so experimentation and creative mash-ups are the order of the day.

The company is a long time player in the messaging space — having ridden the first wave of messaging services by creating a system that allowed people to have a phone number for free without a cell plan. Pinger still has a network of up to 12 million monthly users from this messaging 1.0 play which it plans to use to help its new experimental apps phase take off.

“That platform of users is there, there’s a promotional platform built in… We show four billion mobile messages a month — we have revenue, we have profit — so we’ve got a very scalable model, so that as people use these applications there’s a built in way to monetise,” Woock adds.

Making a series of standalone messaging apps — each focused on a single standout messaging feature, rather than adding more features to a single app — is a very deliberate strategy for Pinger. The basic idea being that people actually like having a pick and mix of apps on their smartphone, rather than a single platform that tries to do everything itself. (Someone tell that to Microsoft.)

“We actually tried to build a big, monolithic app twice over the last few years,” says Pinger co-founder Joe Sipher.  “In the early days of the iPhone and smartphone apps,  we thought it’s going to mature, just like the PC… But it turns out people don’t actually use their smartphones that way. Apple and Google and others have done a fantastic job of allowing you to switch between apps… People use WhatsApp for texting and Viber for calling, even though Viber does texting. And they use Tango for video — even though Tango does calling and texting.

“When people download an app they’re actually adding a feature to their phone — and they think of these apps as features. And this [standalone app] strategy is really in recognition that that’s not going away. People are good at downloading an app, saying I want to use this app for this function.”

Despite GIF Chat being an entirely standalone app, Pinger is looking to leverage its existing user-base — and any new users each app acquires — by making all these messaging apps interoperable. This means that a GIF Chat user can send a message to another Pinger app user, even if they haven’t downloaded the specific GIF Chat app, and they will still be able to view it.

If they want to reply in kind they’ll need to get the full app — otherwise they can reply with another message that their current Pinger app supports. In the case of GIF Chat, the app also supports basic text replies so you can keep the wheels of your loopy conversation oiled with a little plain texting.

Clearly Pinger is hoping to generate some viral growth, based on users giving friends a taster of the next cool messaging app. Which may work well, assuming its network of messaging apps doesn’t end up confusing users.

Having to manage too many similar-looking apps — assuming Pinger gives its suite of apps similar livery/look and feel — may end up turning people off. After all, there’s no chance of confusing the purple-loving Viber for the more muted WhatsApp — and wanting a distinct experience  is likely part of the reason phone owners choose to use different apps in the first place. It’s part of the customisation process of making a smartphone your own.

Pinger’s existing demographic is teen-centric, so it’s playing to that audience with GIF Chat (and JukeVox and FreeStyle), but it does intend to try to broaden its user-base, says Sipher. “The first set of apps appeal to [our core teen/college demographic who drive a lot of app downloads] so that we can grow this network and build on these apps but we’re exploring other applications that are really much more for adults. Apps that explore the relationship with couples and families, apps that are around privacy that you might use for business situations vs social situations,” he adds.

An Android version of GIF Chat is due out “later this month”.