CafeMom, a longtime social networking sites for mothers and mothers-to-be, and home to other brands like MamásLatinas.com and celeb gossip outlet The Stir, is today making its move into social shopping with the launch of The Prowl. The new site allows the network’s members to browse through trending collections involving fashion, home goods, kids’ items, and more, save and share their own finds, and shop with the help of friends.

The site is similar in many ways to other product aggregators, including of course, Pinterest, as well as things like Fancy, Wanelo, Wish, Wantworthy’s Fresh, Svpply’s Want, and more. Like much of the competition, it features a way to browse products by category, search for items, create collections (also called “Boards,” like on Pinterest), find and follow friends, and filter products as personalized feeds, a feed of new arrivals, or a feed of the most popular items.

Not Just Shopping With Friends, Advice Too

However, The Prowl’s key differentiating factor is its focus on the social element of shopping with friends. As CafeMom co-founder and EVP Tracy Odell explains, the service is meant to better re-create the experience of shopping out in the real world, where you could ask others for their advice and opinions.

“We  – Kate Ward, my co-founder, and me – settled on social shopping after spending a lot of time on the competitive sites out there. We recognize that it’s a competitive space, but we just kept coming back to the fact that we both felt like there was something lacking for us on those sites,” Odell says.  The company began work on the project in May, then moved into beta testing this June. The beta, which included some 200 users, wrapped last month.

On The Prowl, members are able to ask the community for help in finding items, or alternately, help others in need – as with finding accessories for a dress, or finding the perfect gift for a friend. The Q&A’s are actually posted to the site’s main feed, an appear alongside the products being shared. In time, these can be hashtagged, too. 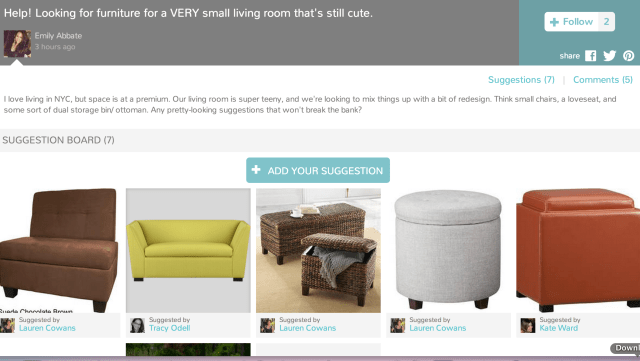 To some extent, the feature pits The Prowl against up-and-comer The Hunt, which is also designed around the idea of crowdsourced shopping assistance. But while The Hunt can often locate hard-to-find items or lower priced alternatives to a specific thing, questions on The Prowl can be more generalized, with users asking about eco-baby gifts, furniture ideas, or other fashion trends, for instance.

In addition, The Prowl also offers up shopping inspiration from a host of “featured” shoppers – style trendsetters whose boards you can follow in order to discover new items. Some of these include “Real Housewife” Alex McCord, blogger Lindsay Ferrirer, and Linda Sharps. Of course, if those names don’t ring a bell, note that users can also find and follow their Facebook friends, with more people discovery tools arriving at a later date. 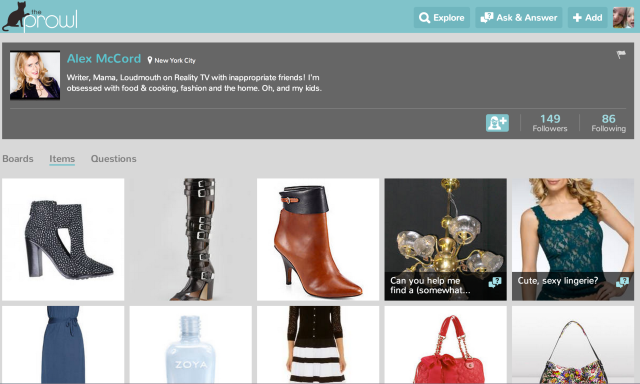 Odell also points out that The Prowl is targeting a different demographic than many of its competitors, noting that others are often focused on a younger audience – teens and women in their 20’s.

“Those users who were at a different life stage than us and therefore the products we found typically weren’t of interest,” says Odell. “Or, the sites were too aspirational — $3,000 handbags are great to look at, but we don’t know too many of our friends who are actually buying them. We wanted to see items that were a little less aspirational, but still inspirational – things we could potentially actually buy for ourselves, our kids or our homes.”

“On other sites you might see a dream bedroom board, but our user is actually redecorating her bedroom and looking for real ideas, not dream ideas,” she adds. 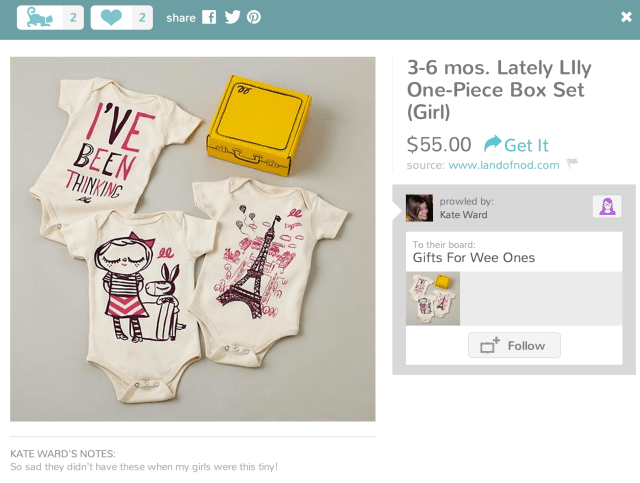 At launch, The Prowl features several thousands products users have added from a variety of retailers. Poking around, these range from those found in traditional brick-and-mortars with online sites like Target, Nordstrom or Pottery Barn, for example, to those operating largely online like Zappos, Modcloth, Shopbop, ASOS, Anthropologie, Piperlime, Free People, as well as on marketplace sites like Etsy. Currently, the site points to e-commerce stores and collects affiliate income, but will monetize through sponsorships and brand partnerships later on.

The Prowl works on web, tablet, and mobile via responsive website design, but native apps for iPhone and iPad are arriving later this month, with Android to follow.

CafeMom/Mamas Latinas currently reaches over 15 million visitors per month (one-third from mobile), which gives it a large user base to tap into – larger than the most recently reported numbers for startup competitors like Wish (~15M) or Wanelo (~8M), but still far short of pinboard giant Pinterest (70M+).