Digital marketing and advertising firm T3 (The Think Tank) is today launching a new platform for mobile application and website developers called Scout, which will allow brands to customize a native application or website’s experience to individual users by tapping into the sensors’ on users’ smartphones, and connecting to back-end enterprise systems. This platform, which T3 dubs “a context engine for mobile apps,” is entering beta with customers, including Coca-Cola and 7-Eleven already on board.

Here’s the challenge, in a nutshell, which Scout hopes to overcome:

Currently, mobile sites and apps don’t deliver “smart” experiences, meaning one that’s tailored to an individual’s current context — a location, the direction you’re headed (if traveling), the weather outside, the demographics of the neighborhood you’re visiting, and more. Instead, no matter where you are and what you’re doing, mobile apps only load up a generic experience, which limits retailers’ and brands’ abilities to target the right users with the right messaging, information or offers. 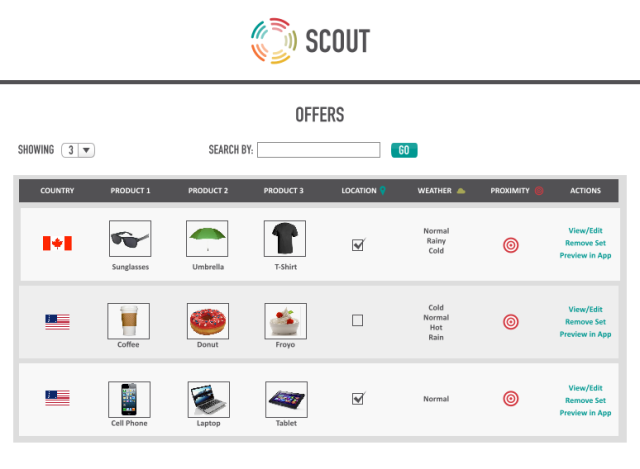 With Scout, that changes. Debuting as a SaaS platform primarily targeted for now at retailers, or those in the travel and hospitality space, app publishers can gather data from the sensors on a smartphone in order to better understand who is using their app or site and what that person is doing in order to personalize the experience.

To be clear, this is not about discovering a user’s personal information — like a name, phone number, or email — but rather about putting the user into one of several pre-configured “buckets” (groups of users) in order to serve up a custom experience.

For example, an app or website could target anyone out and about on a hot and humid day with an offer for an ice-cold drink, or could push sales of umbrellas or windshield wiper blades when it’s raining. If a user were heading away from a store but loaded up a retailer’s app, the offers could improve in an effort to woo them back. And if a user were inside the store, the experience at launch could direct them to the in-store sales, or point to the aisle-by-aisle map.

Though the company has filed for a couple of patents related to how it’s gathering the data from the sensor streams (they promise they’ve developed something with minimal battery impact), what makes the platform compelling for the likes of T3 clients is Scout’s ability to integrate with a company’s back-end CRM, inventory-management systems, data warehouses, and offer engines. That way, it’s not only about delivering a customizable experience, but also one that can reflect data that changes in real-time. 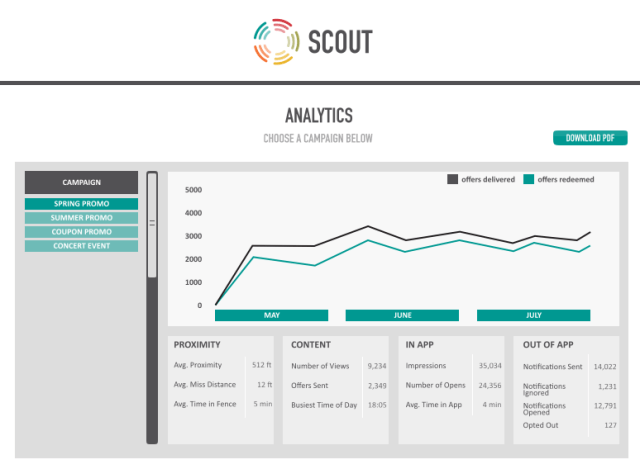 Scout has a set of APIs that can pull in data from places like Salesforce, Sugar CRM, FiCo databases, web services, location or offer-management databases, CMS systems, and more, which is matched with the data retrieved from smartphones to adjust which content is displayed.

Explains Ben Gaddis, T3’s Chief Innovation Officer, there’s a lot of innovation in the digital advertising space at present – using things like geo-fencing and contextual advertising. “But there’s not much going on in the actual service side,” he says. “Once I click on an ad and get to a brand’s mobile website or app, they’re not doing much to take my context and change the experience. So we built a product around that.”

The technology, he notes, has been in development for around six months, with a team of seven to ten inside T3’s creative technologies group working on the product. Now in private beta, the early testers (Coke and 7-11) are already reporting a 40 percent increase in redemption of offers when Scout is used.

Scout, which works on iOS, Android, Windows Phone and web, is currently priced at $2,500 per app (set-up fee), followed by a $2,500 per month fee, which allows businesses to connect their systems and create their campaigns. In time, T3 may expand its offering to other pricing tiers, but that’s not the focus for now – though one could imagine what sort of possibilities it could allow for in a variety of apps, not just those marketing directly to end users.

Of course, the idea that an app or website could know this much about a user’s activity and location is also something that may draw privacy concerns, too. But Gaddis says clients are advised on how they should implement privacy policies, and other best practices, and emphasizes that it’s about collecting anonymized data, not personal data.

But for those who somehow think that smartphones are getting too leaky, there could be another debate soon on the horizon.