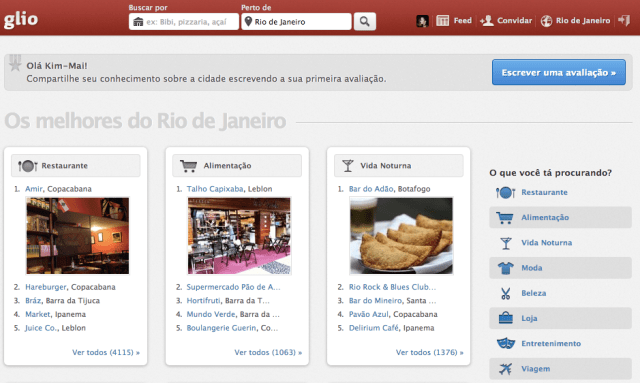 Even though Yelp is almost a decade old, the business model it pioneered with crowd-sourced local listings has yet to permeate the rest of the emerging world.

A Y Combinator-backed startup called Glio is betting that it has a chance to dominate Brazil’s fractured local listings market.

Co-founded by Roberto Riccio, a former professional poker player who entered college at 16, the site is just open to a few major cities in the country like Rio De Janeiro and Sao Paulo.

But eventually, the company plans to expand beyond into Brazil’s mid-size cities and then into other Latin American markets like Argentina and Chile.

Glio’s team got into Y Combinator on the third try, about two years after they originally launched the service. They now have about 10,000 reviews for restaurants and venues in Rio De Janeiro. They just launched a mobile app a few months ago.

Riccio has some experience in building consumer web products for the local market, after creating one of the country’s more popular poker sites called MaisEV.

Riccio said there is no existing dominant market incumbent, although there are competitors like Foursquare, Kekanto and Apontador.

“We think there’s a very big opportunity for local advertising. Brazil has gone through a lot of growth in the last 10 years and there’s been a massive change. You suddenly have tens of millions of people with new access to the Internet,” Riccio said. “We think the timing is right.”

At the same time, Riccio said his competitors are focused on restaurants. But there are broader categories of local data that user-generated reviews could tap into like with drug stores or local retail outlets.

He said the startup is focused not only on getting reviews (since only a small percentage of users take the time and effort to do them). They also broadcast a wider band of a person’s activity on the site, with “likes” and “follows” helping to surface interesting venues or places.

Glio has taken funding from Y Combinator and its associated fund, YC VC.