Facebook could soon look a little more like Twitter. It’s internally testing “Chronological By Actor,” a new way to display updates about live events so they appear in order from most recent to oldest, surrounded by feed posts ranked by its traditional relevance-sorting. It’s not ready yet, but the algorithm test denotes Facebook’s keen interest in stealing Twitter’s real-time social media crown.

Chronological By Actor sorting was announced today at a press event at Facebook’s Menlo Park headquarters. The goal of the “Whiteboard Session” was to help reporters and the world understand how it sorts the News Feed. It revealed it would start publicizing News Feed algorithm changes in blog posts, as well as two changes that have already been rolled out: “Story Bumping,” which bumps stories you haven’t seen yet to the top of the feed, and “Last Actor,” which shows you more feed stories about the people you’ve recently interacted with or viewed the profile of.

But what was most surprising was Chronological By Actor.

Facebook’s strategy with displaying content has been to show you a feed of only the most relevant stories out of everything published by your friends, as opposed to showing a river or firehose of everything your friends post, as on Twitter.

The relevancy-sorted feed lets it adapt as people share twice as much each year — Zuckerberg’s Law. But its deficiency is in real-time events. If you want up-to-the-second information about what’s transpiring in a sports event or breaking news story, Twitter wins. You look at the top of Twitter and you see what just occurred. Tweets don’t get hidden because they didn’t receive enough favorites or @ replies. You can watch things happen as they unfold. Twitter works best when you’re glued to it in the moment, whereas Facebook excels at giving you the most interesting retrospective of what happened while you were gone. 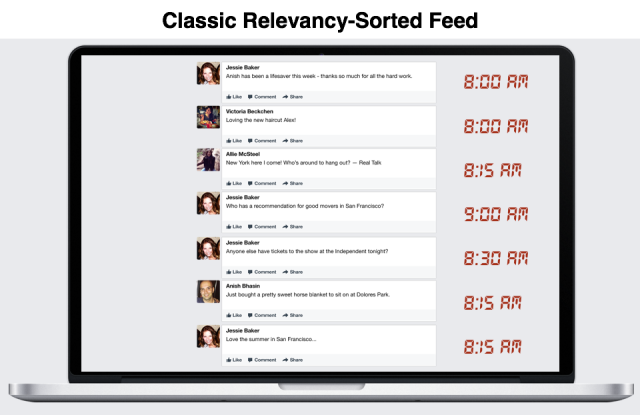 But Facebook is realizing that real-time events create a huge, emotional response that resonates across the whole world. They inspire a ton of social media activity, and advertisers are eager to join in.

So over the last few months, Facebook has been exploring how it can better host these moments. It launched hashtags, which Twitter pioneered, so that people could tag their posts to make them more discoverable by other people looking for information about a specific topic that their friends and the world were talking about.

But hashtags require users to change their behavior. So does Facebook’s Most Recent tab for the News Feed. For years the feature has let users switch from the default Top Stories relevancy-sorted feed to a Most Recent feed with the latest updates at the top. But most users never bother to switch to it, and its not the best format for most content. That’s Facebook came up with the idea for Chronological By Actor — a way to create a hybrid feed that integrates both relevance and real-time sorting. 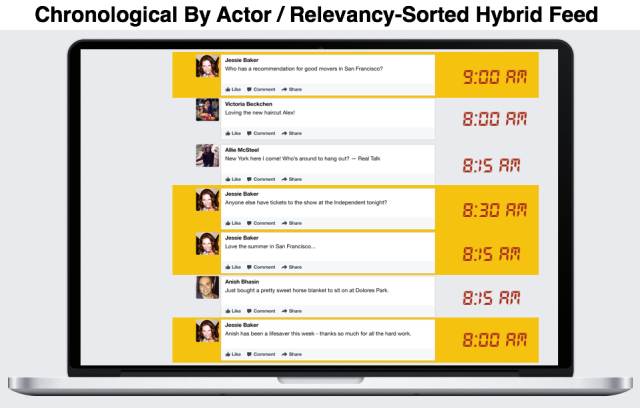 Let’s say your friend Paul posts a bunch of times about the World Cup finals. Normally these updates would be scattered across your News Feed regardless of the chronological order, with the posts that received the most Likes and comments closer to the top, and the ones that didn’t farther below the fold. Facebook realized this made it tough to follow the action. You might see Paul’s heavily Liked post “Neymar on a breakaway, dodges the last defender, and scores on in the first minute!” from the beginning of the game at the top. After three posts from other friends you’d see Paul say “BRAZIL WINS 2-1!!! WOOO!!!!” from the end of the game. Then four posts down you’d see Paul’s less-Liked post, “Jefferson with an incredible save to shut out Italy in the first half.”

All these posts are out of order, so it’s difficult to keep the timeline straight. Facebook suspected there could be a better way to order these posts, which led to internal testing of Chronological By Actor. It determines which posts by a specific person are about a certain real-time event, and then sequences them in chronological order with the most recent at the top like Twitter, but leaves the rest of the feed as is.

In the version currently being tested, you’d see “BRAZIL WINS 2-1!!! WOOO!!!!” “Neymar scores on a breakaway in the first minute!” at the top of your feed, “Jefferson with an incredible save to shut out Italy in the first half,” as the fourth post in your feed, and “BRAZIL WINS 2-1!!! WOOO!!!!” after another four stories by other friends. Paul still fills up the same numbered slots in the feed, but his content is swapped around to flow as if you were reading them in real time.

The only problem is that Facebook said its tests of Chronological By Actor actually reduced Likes, comments, and other signals it uses to gauge News Feed success. That’s why the algorithm change hasn’t been rolled out like Story Bumping and Last Actor. It still needs some tweaks.

When asked by AllThingsD’s Mike Isaac if this test showed Facebook was becoming more like Twitter, Facebook’s VP of Product Chris Cox explained that this was more of an isolated tweak than a broad shift in strategy. “Philosophically, Twitter and Facebook are still quite different in their product assumption and product promise. We’ve always been committed to ranking, just given the core demand of ‘I don’t want to miss stuff.’ Twitter has built a whole ecosystem around not ranking and showing things in real time. I wouldn’t over-pivot on this feature. We’re not changing the core philosophy.”

That makes sense for Facebook. It’s not just tweet-like status updates and photos. Facebook’s feed can show off-site Open Graph app activity, new friendships, Event RSVPs, Likes of Pages and much more. Most of that stuff is only interesting if it’s about your closest friends, so if Facebook were a firehose, you’d probably find very little of it interesting. Real time is great for events and breaking news, but not day-to-day life.

Still, at the end of the day, Facebook is about connecting people, and real-time events make the whole world feel like they’re experiencing something together. Facebook can’t just adapt the feed to handle more content. It needs to learn to treat different types of content as special and unique snowflakes.