San Francisco-based startup Pixelpipe, which previously offered services for uploading photos to a variety of online destinations, before moving to support a wider variety of file types under a cloud-to-cloud rebranding known as Pi.pe, shut down today. The company says it will now be “joining a much larger organization,” but the details are not yet finalized.

However, there are hints that at least some of the work Pixelpipe had accomplished won’t be all for naught, as the company’s brief but vague blog post notes that the team will be “working on similar themes to what we have delivered with both our Pixelpipe and Pi.pe services.”

Founded back in the later stages of the Web 2.0 era, Pixelpipe first launched back in fall 2008 as a personal media syndication utility that let users distribute audio files or images to a number of popular online services, including Flickr – or, to give you an idea of the timeframe – to sites like friendster, Pownce, Friendfeed, 72photos, Acrobat.com, Fotki, Buzznet, and others.

The company continued on for many years, raising $2.3 million in funding, and becoming fairly well-known – though never hugely popular – as a utility for quickly getting photos into the cloud, via desktop or mobile. Then, in April 2012, it made a slight pivot, or perhaps “expansion,” if you will, to focus on moving data between cloud services, instead of from a desktop computer or mobile phone into the cloud, as with Pixelpipe. 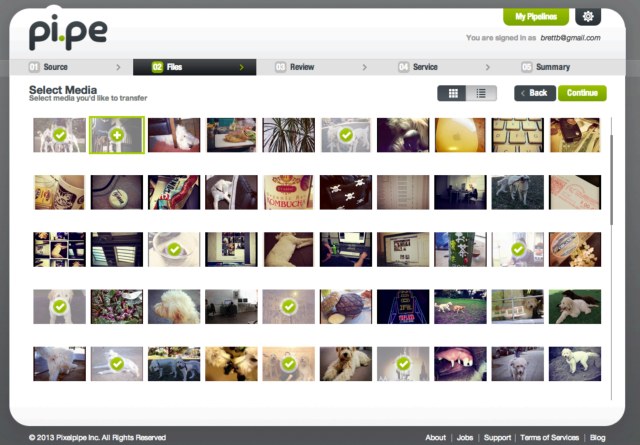 There are actually few ways to do this today – if, for example, you want to export your Facebook photo collection and move it to Flickr, or put all your Dropbox photos and files into Picasa (now G+ Photos) or Google Drive, for instance – it’s still hard to do after the fact. Though other tools like IFTTT have come along to automate actions that can occur at the time of upload or posting, as the case may be, managing larger libraries of cloud data is something consumers don’t really have many good tools to do. (Or maybe, don’t want to do?)

As of this May, the company’s users had transferred over 50 million files to date, up from 8 million in October 2012. Between the two services, the company had just over 1.2 million users, and the average Pi.pe user imported around 700 files and exports over 850.

Obviously, we’re all placing wagers here on whether or not it turns out to be Yahoo who bought this one up. (We’re digging.)

Update, 7: 30 PM ET: Pixelpipe CEO Brett Butterfield has responded, but only to say that he cannot talk about the deal until it’s been completed. “I will however say that it’s good news,” he notes.

Now, the company says that today it’s shutting down both the Pixelpipe and Pi.pe services, and yes – it’s effective immediately.

Both sites are redirecting to the company blog post, copied below.

The Pixelpipe team is pleased to announce that we will all soon be joining a much larger organization. While the details are still to be finalized, we can say that we will be working on similar themes to what we have delivered with both our Pixelpipe & Pi.pe services.

We are very proud of the many millions of files that we have been able to share over the years & thank all of our loyal users.

Today we are shutting down both the Pixelpipe & Pi.pe services. We hope that you have enjoyed using our free services & will only wish us the best as we transition to our new roles. Please follow our blog for further updates, you can direct any questions or comments you may have to aloha@pixelpipe.com