Germany’s new copyright law comes into force today but several major German publishers haven’t rushed to pull their news snippets from Google News, despite lobbying in favour of tightening the law. On the contrary, they have opted in to carry on having their snippets displayed. Call it a love/hate relationship, where ‘love’ refers to the traffic generated by click-throughs from Google News and ‘hate’ to the sense of indignation that Google gets to cream off news content and use it to power its own aggregator service.

German publishers including Axel Springer – whose publications include the newspapers Die Welt and Bild — had lobbied for German copyright law to be extended to cover the snippets of stories Google displays in its News service. They also lobbied for search engines to pay publishers to display these news snippets. But it’s one of several big German publishers that have apparently opted in to Google News. 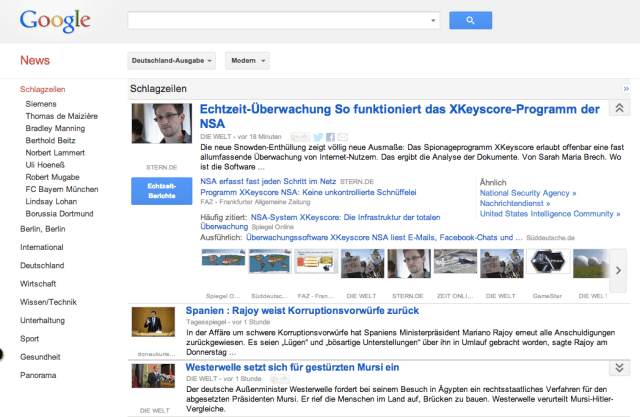 Ahead of the new law coming into force, Google changed how Google News operates in Germany, making it an opt-in service, rather than the current default opt-out in all other markets where it operates a local Google News service.

At the time of writing, Axel Springer was not available for comment but according to an AP report (via the Verge) the publisher said it still expects to receive money from Google eventually. Two more German publishers — Spiegel Online and Zeit Online — have also opted into Google News for the moment, according to AP.

Google has had to deal with similar disputes with publishers elsewhere in Europe — including in Belgium and France — but those dispute have not resulted in copyright law extensions. Instead, Google settled with French publishers after agreeing to set up a €60 million fund to support French publishers’ digital initiatives. It also settled a dispute with Belgian publishers in December by agreeing to partner with them and help promote their services and content.