Murmur fills the gap between traditional management consulting firms such as Hay Group and Gallup that provide in-depth but costly research and much simpler platforms like SurveyMonkey that allow companies to quickly create surveys but don’t provide context or analysis.

“The last decade has been torrent of innovation in marketing analytics, how we ask questions, how we visualize the results and how we use those results to change the culture,” says Culture Amp co-founder Didier Elzinga. “We know an incredible amount about someone who buys a single hamburger from us, but there are people who we have worked with for 10 years who we don’t know a single thing about.”

Launched less than two years ago, Culture Amp already has an impressive client roster that skews toward tech startups, including Pinterest, Gilt Groupe, Hulu, 99designs, ModCloth, Klout and OpenDNS. A typical Culture Amp client has about 400 employees but plans to increase that number by 50% in the next eight to 10 months.

“[Tech startups] are companies that believe in the power of data and because they are growing so fast, recognize the culture and the people they hire as the biggest leaders they have for succeeding,” says Elzinga. Culture Amp’s clients also come from sectors such as retail, manufacturing, media and financial services.

Murmur’s data is gathered from engagement surveys, which gauge employees’ emotional commitment to their companies. The analytics platform then visualizes results in order to help managerial staff hone in on areas that may be causing dissatisfaction, such as lack of promotion opportunities. In addition to measuring how engaged (or not) staffers are, Murmur also gives suggestions on how to improve scores. 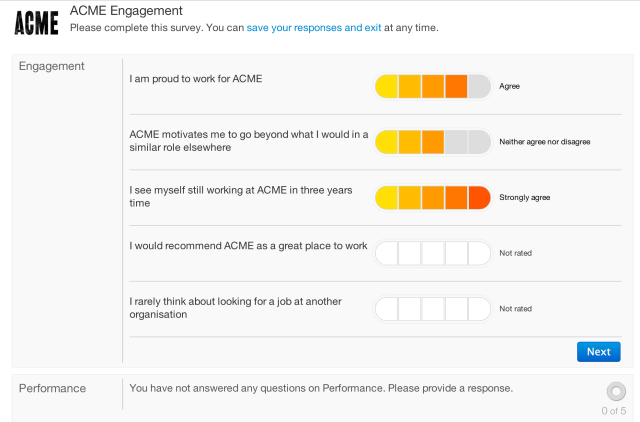 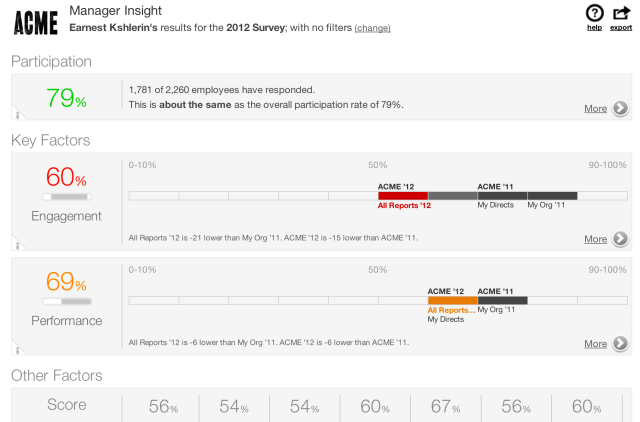 Of course, companies have to first convince employees to fill out surveys in order to get good data. The development of Culture Amp’s survey questions, which are designed to be completed quickly, was led by its Chief Scientist and psychologist Jason McPherson.

“Traditionally people designing surveys have been more interested in the statistical validity of models are normed across thousands of people, as opposed to the experience of the person doing the survey. But once you give up hope, you just start entering random data,” says Elzinga. “You should be able to to complete one on the fly in under 10 minutes.”

Culture Amp’s clients receive survey templates which they can change to suit their needs. The default form includes questions that measure employee satisfaction by asking if they are proud to work for their company, whether or not they would encourage a friend to join their organization or if they are motivated to work harder there than at other places.

Elzinga says employees are more likely to answer questions when they can see how answers can be used to improve an organization’s working culture. Anonymity is also key–Culture Amp ensures confidentiality by aggregating feedback in groups of five respondents or more.

One of Murmur’s advantages is being able to pinpoint issues that are eroding employee morale before they snowball into expensive crises. For example, one of Culture Amp’s clients, healthy school lunch provider Choicelunch realized that satisfaction at one location was low even though workers were still performing well.

“After running the survey they were able to see that a pocket of the company was not engaged as they expected them to be,” says Elzinga. “The CEO, Justin Gagnon, said to me that without having the results and seeing that it didn’t line up with expectations, that would have gone on for years and those people would have left.”

Though Elzinga says the bootstrapped company intends to remain in Melbourne, its roster of Silicon Valley clients recently prompted Culture Amp to hire its first permanent U.S. employee, a San Francisco-based head of marketing. Culture Amp plans to expand into European and Asian markets including Indonesia, where the rapidly increasing number of white collar jobs means there is a strong growth opportunity.

“Our tool doesn’t fix culture. It doesn’t improve anything. It’s a diagnostic, but it’s critical because it starts the conversation,” says Elzinga. “There’s that immediacy that’s so important.”