CrunchGov Essential is a scannable roundup of technology’s influence on the day’s big issues. Below a feature post, we present the most thoughtful, outrageous, and inspiring stories told through the web’s best content. Sign up for the morning newsletter here.

I’m not a fan of the National Security Agency’s secret dragnet program, but I’m honest enough to admit that I hold a minority view. Recently, a string of stories have wrongly implied that the public has become more privacy-happy in response to the scandal surrounding the leak of the NSA’s telephone and Internet metadata surveillance program. So, to test whether public opinion had actually changed over the last month, we ran our own national opinion surveys and found that, like last fall, about 56 percent of Americans approve of the government collecting their data to investigate terrorism.

Perhaps more importantly, Americans think the government is collecting the actual content of email and phone calls, and approval of the program slightly increased in the last month.

In future surveys, I’m hopeful that public opinion will, at the very least, support more transparency in mass surveillance programs, but, in the meantime, let’s explore the facts as they are. 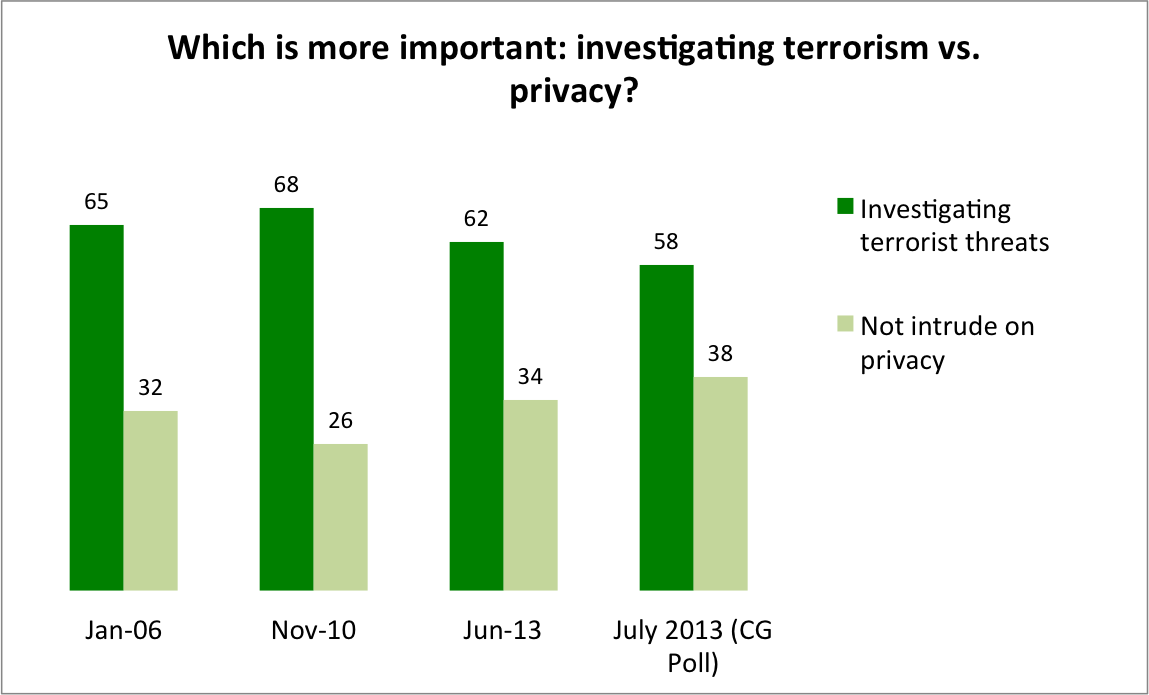 Since January 2006, about twice as many Americans have consistently thought it more important to “Investigate terrorist threats” than to “Not intrude on privacy”. The last column in the graph is our own Google Survey CrunchGov Poll. You can view the methodology and wording here.

Our results show about a 4 percent dip from Pew from last month, but it’s almost within the margin of error (2 percent) and it’s slightly different wording, so it’s doubtful there’s much of a change, if any, in public opinion.

Fortunately, Google Survey also gives us an idea of why people answer the way they do. A few responses: 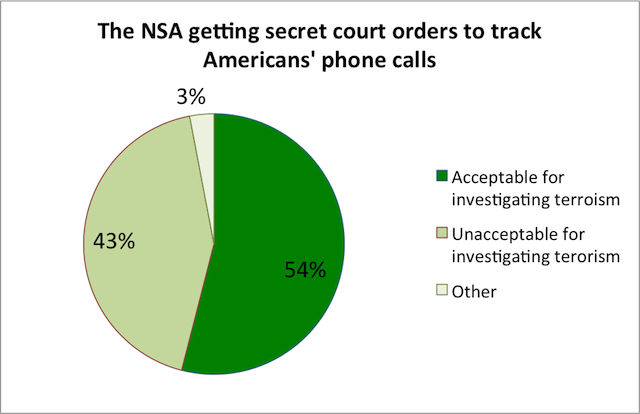 About the NSA specifically, a slight majority (54 percent) favored the current dragnet program. Some of the justifications:

Privacy-advocates may not like the way Pew framed the questions, but I think they’re fair. It explicit asked if it’s ok to track millions of Americans’ phone records. In fact, I thought Pews wording was too negative against the NSA. A more balanced framing would have qualified that the data are unlikely to be read (which is true. most data is swept but no human ever sees it).

Oddly enough, Pew found that not only does the public think the government is collecting more information that they disclose, but the public’s approval of the practice has slightly increased in the last month (48 percent to 50 percent, probably within the margin of error). 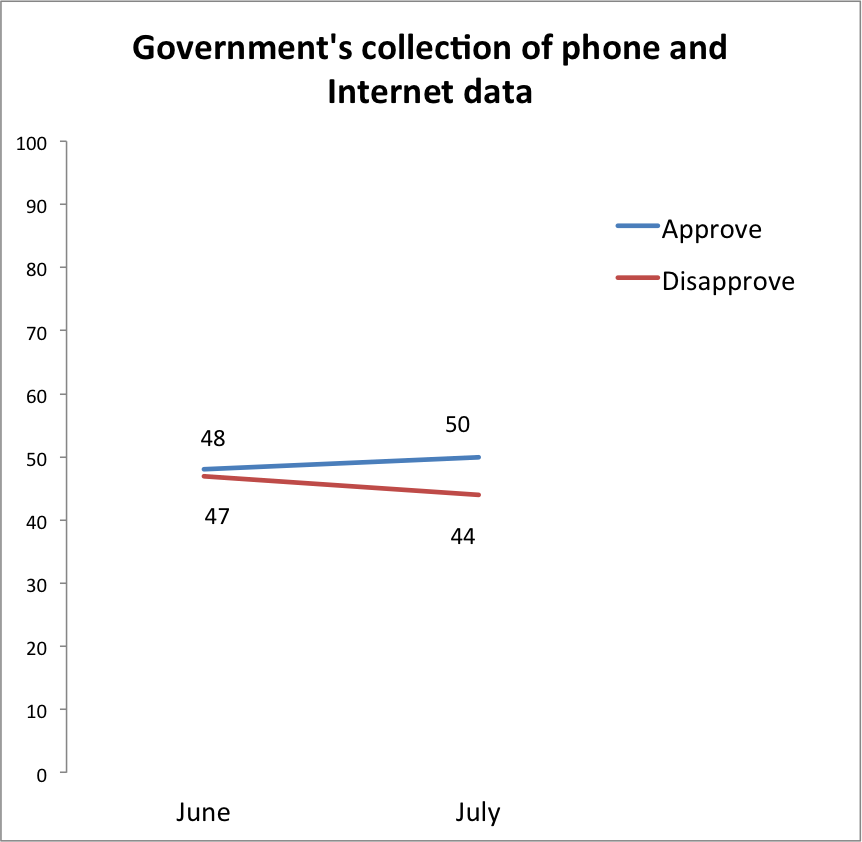 In this next graph, we see that the public thinks the government is lying about how much data they actually collect, since 63 percent apparently believe the government is recording phone calls and collecting the content of emails (the NSA denies this). 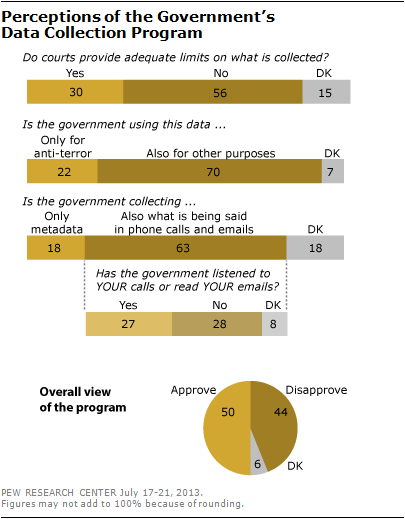 Now, some critics have pointed to a graph showing that for the first time on record, more Americans think the government has gone too far in restricting civil liberties. However, this shift occurred sometime over the last two years, and isn’t specific to the NSA: 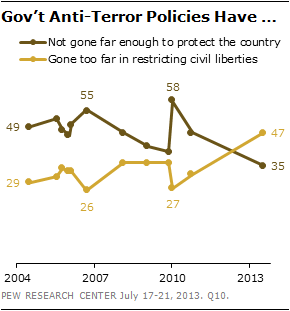 So we can exhibit all the outrage we want, but critics are in the minority. I suspect Americans would want more transparency in the process, and that will be the subject of future CrunchGov polls. Until then, we need to be honest about what the American public actually believes.

–Staunch NSA defense, Senator Diane Feinstein, writes an OpEd calling for more transparency for surveillance programs
–Targeting should be made public, number of warrants made public, more Democrats on the secret FISA court (and more!)

–“President Barack Obama on Thursday told lawmakers he is open to changing controversial surveillance programs in order to restore public confidence and provide assurance the government is not violating citizens’ privacy, participants at the meeting said.”

FBI Remote Monitoring [WSJ]
— “The FBI develops some hacking tools internally and purchases others from the private sector. With such technology, the bureau can remotely activate the microphones in phones running Google Inc.’s Android software to record conversations, one former U.S. official said. It can do the same to microphones in laptops without the user knowing, the person said. Google declined to comment.”

NSA snooping on what YOU are reading at Wikipedia means I want us to go to SSL sooner. Bastards fuck off. http://t.co/pUEVbreDeb