Sourcebits, a young mobile development house, captured $10 million from Sequoia and IDG in 2011 for its expertise in developing custom mobile, web and cloud solutions for businesses. Sourcebits has developed hundreds of apps for a range of companies, from Fortune 500 players to startups, including Night Stand HD, Apocalypse Max, FunBooth and Robokill.

Since then, a team within the strategy and design firm split off to begin working on a project called Twine, which essentially sought to create a better mobile solution for flirting with and meeting new people. After a year in development and looking to capitalize on the growing popularity of “people discovery” apps like Highlight and mobile flirting apps like Tinder, today Twine is officially bringing its “ice breaking” app to the App Store and Google Play.

Apps like Omegle have taken off among young people, because they tend to be more comfortable with these types of ways to meet strangers, chat with them, and quickly move on to the next conversation. Essentially, it’s anonymous serial chatting, if you will, a spin on the same principle behind both Chatroulette and Airtime. On the other hand, it’s an extension of mobile chat and texting experiences like WhatsApp, Viber and Rounds, a class of apps that has become extremely popular among young people in particular.

But Twine differs from these in that it’s tackling the “new friend discovery” experience, anonymously matching you with strangers around you, while attempting to remain spam free. The second big differentiator is that Twine is actively curating its user base in order to achieve a 50/50 balance of males to females using the app.

The reason for this is that men tend to be more active users of flirting and dating apps, so the women who are using whatever platform tend to get bombarded with texts, messages and so on. Women also tend to be more selective, while men cast their dating nets wide, so it leads to a disproportionate amount of women not only getting blown up with spam, but rejections and broken-hearted suitors. Round and round that goes, until everyone gets fed up and leaves.

Twine keeps the ratio even and, à la Tinder, puts the focus on chatting and flirting with new people, not dating. It’s designed to be casual. The app also uses an algorithm that matches you with an anonymous chat partner based on your interests and proximity to those users — the idea being to create the most compatible local connection so that you go meet the person in real life if you happen to like them and hit it off. 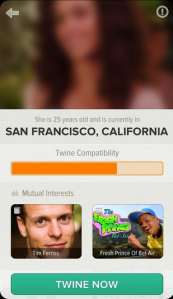 Twine gathers your “likes” and interests from Facebook, matching you to the closest fit. You can immediately begin chatting and continue the conversation as long as you want. However, unlike Tinder, their profile picture is blurred so that you can’t see exactly what they look like, the idea being to keep the focus on the chat and getting to know the person — not the blatantly superficial. If you like them, you can hit a button asking them to reveal. If they agree, it will then un-blur their picture so that you can see what they look like.

The idea, again, is to focus on connecting first, not on engaging based on a profile photo, offering users features like its so-called “I.C.E.,” which parses the interests of you and your Twine match, generating unique questions you can send to them to get the conversation flowing. For example, if you’re both Beatles fans, the app might suggest “What’s your favorite Beatles song?” to help break the ice.

Twine also limits the number of matches that you can make and receive per day (up to six) in an attempt to ensure that users don’t get pestered with spam and in an effort to have the matches they create result in more meaningful conversations and connections. If you get bored of talking to a person, you can ask Twine to match you to a new person, but again, you only get a fixed number of matches per day — three inbound and three outbound. (That means you can hit the “Twine” button three times yourself, while you may end up as three other peoples’ match as well, if that makes sense.)

That puts Twine in stark contrast to Tinder, which is all about quickly flipping through photos and passing quickly from person to person until you find someone you’re interested in — it’s more like mobile speed flirting. Twine wants you to have some of those features, but to actually dig in, too.

The ice-breaking question auto-generator is a cool feature, but Twine is going to have to offer more incentives. Even if you really hit it off with someone in chat, people use these kind of tools because they’re bored or they want to flirt with someone, and there’s only so much talking you can do with complete strangers before you’ve decided whether it’s a waste of time or a match. I could see people easily using up their three matches and being annoyed when they don’t have the opportunity to find more, especially when there’s a ready-made mobile community that allows them just that. 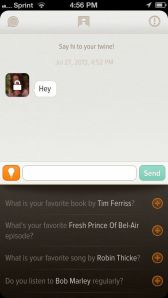 Also, the cool thing about apps like Rounds is that they allow couples and friends to co-browse together on their phones when in two completely different locations. They can play interactive games together, browse the web simultaneously, doodle on whiteboards, send virtual gifts and video chat. These tools are all missing from Twine in its first release, but could be huge additions to the app to add more stickiness and potential engagement to the user experience.

The startup says that a few of these capabilities will likely be coming in the next version of the app and, because Twine is free, virtual gifts could provide a future opportunity to monetize. Or, the company says, it might also consider creating a kind of Twine token that users can buy and then cash in to receive more matches if they go beyond their first three.

With how popular Tinder has proven to be, it wouldn’t surprise me if people (especially younger users) just flat-out prefer the more image-based (or superficial) dating and flirting experience on mobile. But Sourcebits and the Twine team have clearly designed this to be a direct response or counterpoint to mobile dating experiences like Tinder. So, for those who are looking for a more meaningful chat and flirting experience, Twine could be it by striking a good balance between the two.

Plus, in a flirting marketplace like this, there needs to be an equality of supply and demand. The more users, the more opportunity Twine has to match you with someone you’ll actually enjoy talking to and connecting with in a mobile chat room. That’s going to take time, but at the very least, with a run of successful apps under their belt, Sourcebits is a strategy and design firm that knows how to design a good mobile app. For that reason alone, and based on the amount of demand there is for mobile dating and flirting experiences (and how much room even popular apps like Omegle have left in the quality department), Twine is worth checking out.