Facebook shares (NASDAQ:FB) finally broke the psychological glass ceiling of $38 a share, Facebook’s IPO price. Currently trading at $38.22 a share, the stock is slightly up 1.52 percent compared to yesterday’s closing price — it opened at $37.98 but popped above $38 in seconds. It has been a tumultuous year for the stock, but investors now seem to be satisfied with Facebook’s solid growth and its revenue on mobile.

Today marks the end of Facebook’s hesitant steps to become a mature public company. At first, CEO Mark Zuckerberg didn’t communicate a lot and the company was mostly focused on building a better product. While it was important to bring more users on board, it wasn’t enough to convince investors about long-term revenue. Building a public company demands a lot of communication efforts.

Many were concerned that Facebook wouldn’t be able to become a mobile-first company, but Zuckerberg insisted that it was his primary concern at TechCrunch Disrupt SF 2012. It drove the stock up that day.

But more importantly, the company managed to bring more revenue and shift to mobile at the same time. It reported impressive Q2 earnings, with mobile ad revenue now representing 41 percent of the total ad revenue.

Facebook’s IPO price was $38 a share when the company started trading in May 2012. But in August 2012, the stock fell to its lowest price for now, $19.69, as the initial lockup expiration of 271 million shares kicked in. Early investors Accel Partners, Meritech Capital Partners and Greylock Partners all cashed in. Andreessen Horowitz, Microsoft and Kleiner Perkins chose to stay on board.

Zuckerberg had to reassure investors by saying that he wouldn’t cash in on his shares and the stock wouldn’t drop below those levels.

Yet, other lockup expirations were more favorable for the company. The first employee lockup expiration led to a smaller 5 percent hit, followed by a few days of downturn for Facebook shares.

On November 14, the biggest lockup expiration occurred and shares popped more than 10 percent, marking the end of the hectic days of Facebook stock price. After that, shares were much less volatile and subject to irrational changes. Short selling Facebook shares wasn’t as popular as well.

Since then, shares have been trading slightly above $30 or slightly below $30, still very far from the $38 IPO price. Shares have been up only very recently, after Facebook’s earnings call and great mobile numbers. Now, the stock could stabilize at this level (around $38), because shares were already up more than 6 percent yesterday. But the current trend is encouraging. 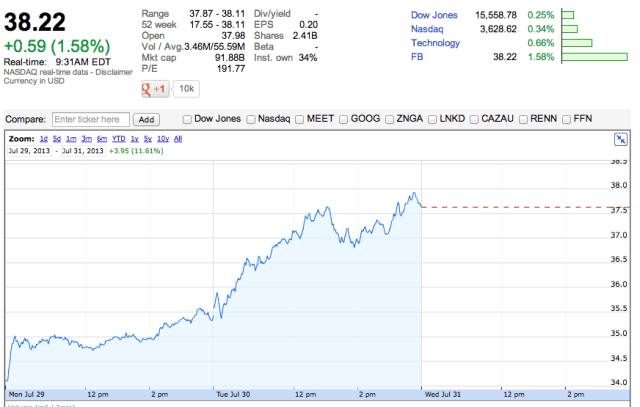