Bottlenose, a web platform to organize social media streams, has raised $3.6 million in Series A funding. The round was led by ff Venture Capital and joined by Lerer Ventures, Transmedia, Advancit, Stage One Capital, Social Starts, The Social Internet Fund and several angel investors. Including a seed round in 2012, this brings Bottlenose’s total to $4.6 million.

The last time we talked to them in 2012, Bottlenose was about to launch its public beta and had about 50,000 users. Bottlenose beta allows you to sync multiple accounts so all news streams are aggregated in one place. The free version is available online, and uses its sonar tool to make connections between tweets, mentions, hashtags, images and other media. CEO Nova Spivack says all new funding will go to scaling its engineering, sales and marketing operations in preparation to publicly launch its new product, Bottlenose Enterprise.

Bottlenose Enterprise expands on trend and real-time data analysis, with features to view audience response, sentiment, impressions, volume and correlations. You can list topics you want to track, and the program will automatically keep tabs on its activity, connections, media mentions and more. The goal is to help marketers and brand managers determine trends as they are happening and capitalize on popular topics and events.

Spivack has been involved with several other startups, including EarthWeb, Radar Networks, The Daily Dot and StreamGlider. He says he has had experience building search engines, and helped in the original technology that eventually became the iOS personal assistant, Siri. 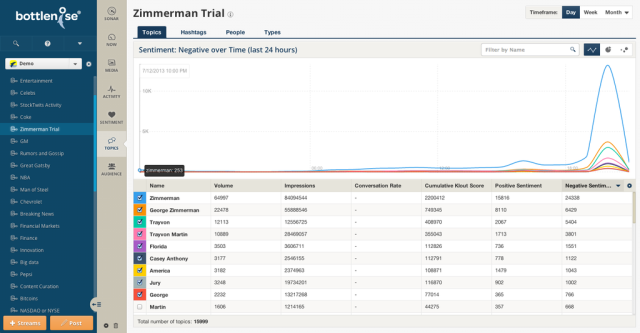 Bottlenose isn’t the only company that’s adjusting to meet the needs of real-time marketing. Another startup, Awe.sm, measures social media campaign effectiveness by monitoring media channels for advertisers. However, Bottlenose Enterprise is less about gauging effectiveness and more focused on getting ahead on the most viral trends. While the previous version of Bottlenose is comparable to social media managers such as HootSuite and TweetDeck, the new edition is focused on analyzing data from thousands of sources. Now it faces competition from media analysis platforms, such as Networked Insights, which has raised almost $30 million in funding and has worked with companies like Samsung, MillerCoors and MTV Networks.

Bottlenose Enterprise is in private invite beta and is scheduled to launch publicly in the fall. Spivack tells me its target customer base is Fortune 500 companies, of which they currently have dozens of users in pilot and as customers. The Bottlenose beta serves about 100,000 professional marketers, and the enterprise version is being used by brands like Pepsi, FleishmanHillard, Razorfish and DigitasLBi.