Women Rule is a new programming and event series to recognize female leaders and bring them together to give advice to women in politics and business. The joint partnership between politics blog Politico, Google, and women’s support network The Tory Burch Foundation will produce an online media hub and four-part event series in Washington, D.C., that explore the challenges female leaders face.

The initiative shares some ideals with Lean In, the book and campaign by Facebook COO Sheryl Sandberg that hopes to teach and inspire women to achieve their goals. These issues have entered the spotlight lately, as it becomes clear that there is a lopsided presence of men in leadership positions, especially in technology.

Google’s Susan Molinari, vice president of Government Relations and Public Policy, says, “It is time to have an open discussion about the unique issues women face with our next generation of female leaders.” The Women Rule events in D.C. will include members of Congress, business leaders, entrepreneurs and administration officials and “will examine the steps women leaders are taking to effect change – everything from spurring a movement to passing legislation.”

Politico will launch the Women Rule media hub next month, which will also sell Women Rule apparel, with the proceeds going to charities, including the Tory Burch Foundation. 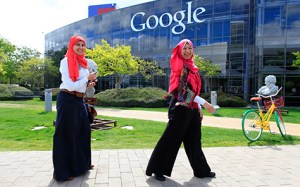 Google’s clout, as well as its financial and technical support, could give Women Rule a better chance of bringing in high-profile female mentors and making an impact. In the past Google has hosted The Bush Institute’s Women’s Initiative Fellowship Program, and actively promotes that it has women in leadership positions.

Still, Google was dinged in a New York Times article last year for a dwindling of women among its executive ranks. Marissa Mayer had left to become CEO of Yahoo, and other women were pushed out of the inner circle when Larry Page reorganized the executive team. Google has made strides toward keeping a strong female influence, though. It’s reportedly developed algorithms to detect where women were dropping out of job interviews, extended maternity leave, and that ensured female candidates interact with other women during the hiring process.

Getting the Google name more involved with the discourse on success equality through Women Rule could help it recruit and retain top female tech and business virtuosos in a fierce talent market.