The CrunchGov Essential is a scannable roundup of technology’s influence on the day’s big issues. Below a feature post, we present the most thoughtful, outrageous, and inspiring stories told through the web’s best content. Sign up for the morning newsletter here. 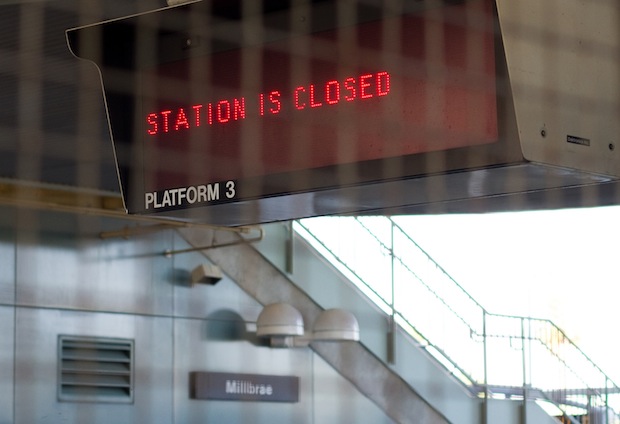 None of the Internet giants have unionized employees, which has made Silicon Valley a favorite target for civil libertarians.

Earlier this month, after several prominent Bay Area technologists came out against the BART subway union strike, it provided a convenient excuse for haters to brand the tech community as greedy oligarchs. “There’s a reason why so many people are hating on the techies,” wrote Slate’s Andrew Leonard, after quoting one tech executive who wanted to automate BART employees out of existence — “Get ‘em back to work, pay them whatever they want, and then figure out how to automate their jobs so this doesn’t happen again.”

There’s a very good reason why unions have never had a presence in Silicon Valley: they aren’t fans of technology. Labor unions have aggressively fought Uber and Lyft, which threaten taxi drivers with increased competition. They’ve effectively paralyzed a multi-billion-dollar sharing economy industry from spreading around the country.

Not to be outdone, one of the largest labor unions in the country, AFL-CIO, is the leading opponent of more high-skilled immigrants, calling the tech community “greedy” for wanting to make it easier to hire foreign engineers.

Technology is in the business of disrupting industries. Startups will tell you that it takes every ounce of brains and grit to get a product off the ground; they don’t just need an environment that acquiesces to technology, but fully embraces the chaos.

Two surveys, one from 1983 and another I conducted this month, illustrate the differences in attitudes on innovation between tech workers and unionized workers.

Chart 1: Only 16% Of Unions Advocated For Technology

As far back as I can see, unions have been tech-averse. In one 1983 survey of labor unions [PDF], Researcher Stephen Peitchinis found that a mere 14 percent of unions had policies advocating for technology change, while 14 percent actively opposed innovation if it threatened members’ jobs. Most (42 percent) have policies that begrudgingly accept technology so long as employers do so in a way that minimizes its impact on the workforce.

Peitchinis also has a few historical gems in the paper, including one of a railway union that fought to keep fire-safety workers on board after trains got rid of coal power.

It is no shocker, then, why economists generally find an inverse relationship between innovation and unionization. “Indeed, economists generally find that unions stall innovation,” wrote a research team from the University of South Florida in May. “Firm innovation output, measured by patent counts and citations, declines significantly after firms elect to unionize and increases significantly for firms that vote to deunionize.”

It’s no wonder that unions never found a foothold in the Valley.

Since the survey was conducted in 1983, I wanted to see if the protectionist sentiment was still around. I tried to replicate the spirit of the study, using Google Surveys to gauge the attitudes on job-replacing-technology on union workers vs. people who work in the tech industry. 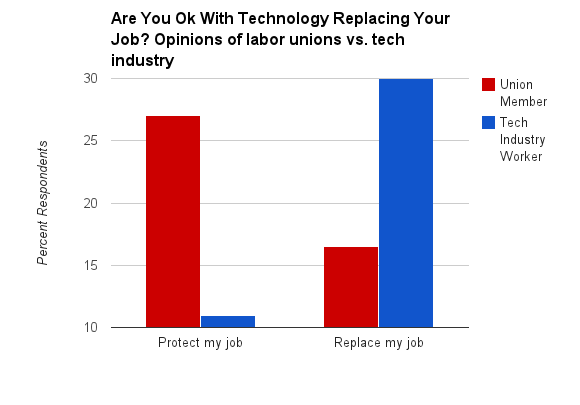 The Lucky And The Sacrifice

Unions may be quite valuable in other parts of the country, but they haven’t been needed much in the Valley. Despite having no union, Facebook, Google and other tech companies are consistently voted the “best” companies to work for in America. Cushy salaries, luxurious dining amenities, and decentralized management structures provide an elite class of high-tech workers all the benefits and influence that unions have long hoped for.

Moreover, the Valley has long subsisted on freelancers, who roam between high-tech firms. “I think unionization would ruin the free spirit and innovation in the high-tech industry,” freelance web designer Alvin Bost told CNET in 2001. “It would be terrible for people like me.”

Unfortunately, those outside the Valley bubble have experienced rising inequality, as technology automates more and more jobs. It’s a serious problem. If Google ran the BART system, I seriously doubt a human would still be powering every train.

However, I think Slate is wrong to characterize this as “class warfare.” Many technology workers hold a genuine philosophical belief that the benefits to innovation outweigh the short-term gains of protecting workers. I think many in the Valley have been honest about their philosophical assumptions, and it’s time for unions to be honest about theirs.

*Graph 2 Methods: We ran a single-question survey to a 1000 respondents via Google Surveys. You can see the survey here.

**A version of this piece was first written for The Daily Beast. You can read it here.

–Barnaby Jack, who was set to speak at the Black Hat hacker conference, died at the young age of 35
–“Jack had exposed a security flaw in insulin pumps that could be made to dispense a fatal dose by a hacker 300ft away, pushing some medical companies to review the security of these devices.”

–Senator Ron Wyden wrote an OpEd to promote medical data transparency, for his bill, Medicare Data Access for Transparency and Accountability Act
–“patients could see how often a physician performed certain lab tests, X-rays, MRIs or other treatments, and at what cost. Similarly, patients could also see the wide price variations between nearby hospitals, clinics and doctors’ offices.
With access to this type of data, consumer groups and other advocates could begin assessing quality of care while researchers could examine regional health disparities and identify ways to address them”

–Harvard Professor Noah Feldman argues that bloggers should be legally protected as journalists when they’re acting as journalists.
–“Anyone publishing information for the public interest is protected by the First Amendment — and that same anyone should get the protection of a shield from subpoena.”