Archenemies for decades, video games and exercise are about to unite. Atlas is a cheap, new “walk-around” virtual reality system that uses markers you put on the ground to track your movements as you play with an Oculus Rift headset. Protagonist is Kickstarting Atlas to get real-space VR into the hands of developers, so they can build games that ditch joysticks and actually let you run-and-gun.

Here’s how startup Protagonist’s Atlas system works. First you find an open space. If you’ve got a huge living room it could work, but you’re better off in a garage, on a basketball court or in a warehouse. Then you lay out the location markers. You can print them at home, but Protagonist plans to give out vinyl ones that stick to the floor so they don’t get displaced. Then you strap on your Oculus Rift VR goggles, an optional Razer Hydra-equipped gun or sword, and the Atlas chest mount for your iPhone.

Fire up the Oculus and Atlas iPhone app, and step into the future. The patent-pending Atlas positioning system maps the markers and uses your phone’s accelerometer and gyroscopes to know where your are. Play with Atlas and when you walk forward your in-game avatar walks forward, too. Chasing aliens or exploring dungeons could become an alternative to going to the gym. 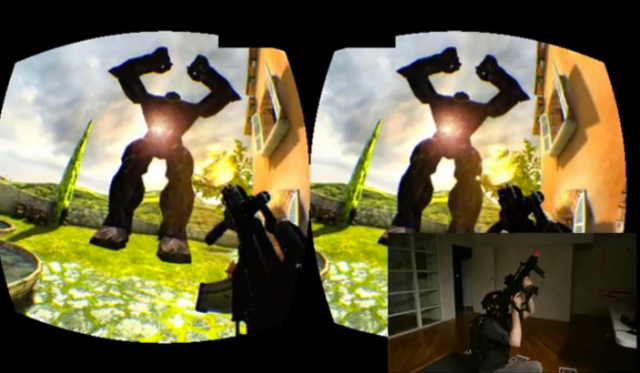 “I’ve wanted a Holodeck since I was a kid,” says Atlas inventor and Protagonist founder Aaron Rasmussen. He’s no stranger to making sci-fi dreams come true. Back in college, Rasmussen was the first person to make an optical-tracking sentry gun. He stitched together an automatic BB gun and a video camera with some home-made machine-vision software to make a weapon worthy of defending your fort. “The military came to my dorm room. I thought that only happened in movies,” he tells me. Since then he’s built and sold a robotic machine tool company called USMechatronics, created the Blood Energy potion drink sold in IV bags, and most recently sold a ghost detector that connects to your iPhone. (It’s detected zero ghosts to date.)

Real-space VR systems have been around for well over a decade but have been reserved for big research institutions. That’s because there weren’t wide-field-of-view head displays with low-latency, head-orientation tracking for under $50,000, and the positioning systems were clumsy and cost hundreds of thousands of dollars. Lucky for Rasmussen, the Oculus Rift took care of the first problem, freeing him up to reimagine real-space positioning. Unlike the Virtuix Omni VR treadmill, Atlas not only lets you walk, but also run, jump, crouch and move around like you do in real life. 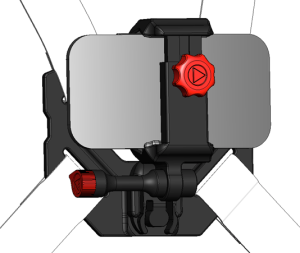 Right now Rasmussen is the only one working on Atlas full-time out of the four-person team, but that will change if it meets its $125,000 Kickstarter goal to manufacture the chest mounts and refine the software. The plan is to get the system and Unity integration assets to developers so they can start building first-person shooters, fantasy epics, and educational exploration games. “Someone should do Jurassic Park,” Rasmussen says.

I’m pretty excited about meatspace/virtual reality hybrid games and their potential to help us avert a Wall-E future where we just get fatter and fatter watching our screens. The technology will take some time to trickle down, but Atlas could eventually become a distinct industry parallel to console gaming.

“We’re really living in Year Zero of virtual reality,” Rasmussen giddily tells me. “We’re going to to see more wearable technology become consumer products. As developers work on games, we’ll work on a consumer version that kids can get under their Christmas tree. My vision for the system is something you and some friends bring to a racquetball court, play a high-intensity game for an hour, and get a workout.”

Kickstart Atlas if you want your games to make you sweat