The motion-sensing Leap Motion Controller, which lets users eschew the traditional keyboard plus mouse combo and interact with their computers via gestures, started shipping to pre-order consumers this week. Apps with Leap Motion support are, as you’d expect, relatively thin on the ground at this point. They include games like Cut The Rope, a Top News app from the New York Times and some creative tools and education apps, to name a few.

Today another app joins the gesture party: DexType gives Leap Motion owners a keyboardless way to type — which could allow, for instance, a doctor to input medical information into a computer without having to wash hands before and after touching a physical keyboard, or a consumer to look up cake recipe details in the middle of baking.

The virtual keyboard works by aligning all the letters into a single string displayed along the bottom of the screen — much like Minuum does with its mobile keyboard software. DexType supports either Qwerty order, or this can be switched to alternatives such as Dvorak, Colemak, Azerty, and Qwertz, or a simple alphabetical order. The Leap Motion user can then type with either a couple of fingers, bouncing from key to key, or using all their fingers if they want a more typical typing/piano-playing style position.

To reduce typos and improve accuracy, DexType’s software apparently includes a “disambiguation algorithm” that looks at the whole group of letters inputted to correct sloppy typing, so the user doesn’t need to be entirely accurate in their virtual key strikes. This autocorrection can be overridden — for instance when the user needs to type usernames and passwords — by using a deeper pressing gesture. While punctuation can be produced by using “chords”, i.e. pressing two keys at the same time in specific regions.

DexType says the software also supports editing via simple gestures, such as a sideways swipe to erase single letters or entire words. While numbers and symbols can be accessed via a separate layout or produced by handwriting recognition. 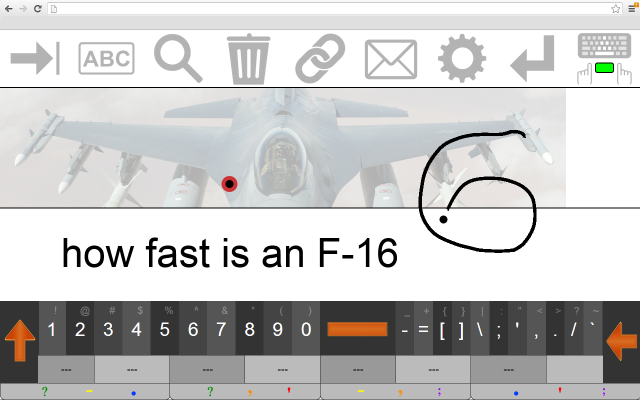 The DexType app is currently available free from the Chrome web store (after August 7 the free version will be ad-supported, and a premium version will cost $4.99). The virtual keyboard’s creators also plan to release a version of the software for Android smartphones and tablets, due in beta in late August.