GoInstant, the startup that Salesforce.com bought for $70 million, has launched a new developer platform for what it calls the “multiplayer web.”

The company, which operates as a separate entity within Salesforce, uses the term to describe the new brand of the web that is more about shared experience. These are apps, such as Twitter and Facebook, that provide endless rivers of news and the ability to comment on a photo and see other comments as they appear. And Google Docs is an example of a service that has a focus on presence with its co-editing capability.

The new GoInstant platform gives developers a secure layer to manage access control, real-time messaging, state storage and end-to-end security through an API that developers can integrate into existing or new apps. It replaces the GoInstant co-browser service that the company originally developed.

“We had an API for our co-browsing product and the predominant overall use of the service was via the API, so we decided to really focus on that success,” said Co-Founder Jevon MacDonald in an e-mail interview. 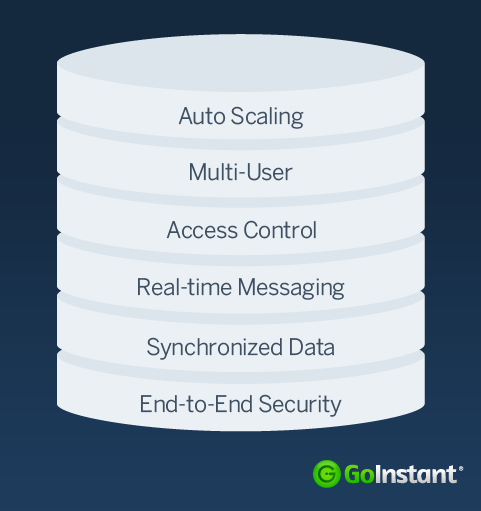 GoInstant has calibrated its service for the enterprise with the capability to put a real-time layer on legacy apps. It does this through its stack of services that are designed to provide the capabilities that security-conscious companies need when developing modern services.

With the new service, GoInstant is entering the back-end-as-a-service (BaaS) space. Parse, Firebase, Kinvey and a host of others are providing back-end environments so developers don’t have to build-out their own stacks. Co-Founder Gavin Uhma wrote on Hacker News that it compares with other BaaS, but the difference is in this concept of the multiplayer concept.

….GoInstant is specifically focused on Multiplayer Apps.Firebase and Parse are both awesome products. They are really useful as application backends. GoInstant is focused completely on multi-user, real-time data. It compliments your backend, rather than replacing it. All of the decisions and concepts in our API are there to make it really easy to manage collaboration between users. It’s completely focused on the idea that you’re developing for a multi-user use case, either sync or async collaboration.

So, everything that happens with GoInstant involves other users. If you set data in our key/value store or send a message, other users are listening to that. Everything is wrapped in a pub/sub msg queue. When you connect or disconnect, other users know. Of course, you want to decide which users will know, so we organize groups of users into “rooms”. We’ve built it from the ground-up with enterprise grade security, so auth, access control, and encryption are all rock solid.

GoInstant is banking on real-time data and how to manage it so we get that seamless experience we are accustomed to.