Yahoo just released its mixed Q2 earnings, and a few sentences may have given the answer everyone was waiting for — yes, Yahoo still has plenty of cash to pursue more acquisitions. Evidence of this lies in the company’s share buyback program. “During the second quarter of 2013 Yahoo repurchased 25 million shares for $653 million,” one can read in the release. Those are part of a bigger $5 billion program. These shares can be reissued and sold for cold cash any day.

Back in September 2012, Marissa Mayer decided to sell 40 percent of Yahoo’s stake in Alibaba for $7.6 billion. $3.65 billion was set aside to reinvest in Yahoo shares, proving that the company is confident in its own future.

“We are happy to announce that as of today we have essentially completed our commitment to return $3.65 billion from our Alibaba Group proceeds to shareholders, repurchasing a total of 190 million shares,” wrote CFO Ken Goldman in today’s earnings release.

But the company will now go even further. It has a $5 billion share buyback authorization with the SEC and it plans to use this authorization in full. In other words, reports of the disappearance of Yahoo’s cash after the $1.1 billion Tumblr acquisition have been greatly exagerated.

For those who are not familiar with a stock buyback program, the stock can either be canceled or reissued at a later date. In case it is reissued it is a big win for the company because existing shares are not diluted and the new shares just keep the same stock number, just like nothing happened.

They are other advantages as well. For example, it shows that Yahoo if very confident, saying more or less that there is no better investment than its own stock. It slightly raises the price of existing shares as there are less outstanding shares. 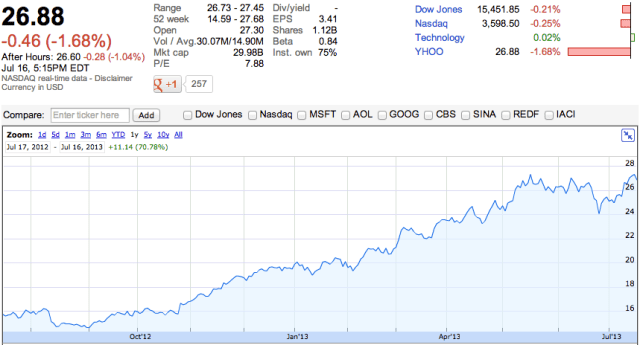 For the past twelve months, Yahoo shares have been doing very well. With a share price of 15.65 on July 16, 2012, today’s price of 26.88 represents an incredible 71.8 percent increase in just a year. That’s better than Google, Apple or eBay.

Yahoo’s share buyback program has paid off so far and the company could spend more than $3.65 billion in acquisitions, because the value of its portfolio is worth more today. As long as the stock goes up, it’s a good strategy.

So today’s earnings taught entrepreneurs and VCs one thing: the acquisition spree can continue.