Rovio and Lucasfilm have just confirmed that it will indeed launch a sequel to the much-beloved Angry Birds Star Wars game on September 19 across the globe. This confirms our earlier report from last week.

Rovio’s Angry Birds Star Wars takes the same physics-based gameplay and puts it in a gravity-free environment, giving users new tricks and tools to destroy the piggies’ habitat and move on to other levels of destruction. With the sequel, Rovio will be launching brand new Angry Birds characters while slipping in a few new surprises.

The game, which follows the story of the three pre-quel Star Wars movies, will give users some new ways to interact with the game. To start, Rovio is combining its merchandise business with it’s mobile gaming business, with the help of Hasbro.

Hasbro will have 30 different “telepods,” which are simply physical fruitions of various characters, available at the time that Angry Birds Star Wars II launches. Users will then be able to scan those characters into the game using their phone or tablet’s camera. Telepods that “teleport.” Cute, right?

The second big change we’re seeing is that Angry Birds players will now have the option to taste Bad Piggies, as Rovio is letting users cross over “to the Pork side.” This essentially means that users can play as the pigs, which happen to be the bad guys, instead of as a bird.

This pulls from Rovio’s original game Bad Piggies, which reverses the roles of the villainous pigs and the heroic birds so that players are actually fighting on the piggies’ side.

As you’d expect, Rovio will also launch a new line of merchandise alongside the game, which will include toys, apparel, accessories, books and plush toys.

Rovio has confirmed that the original Angry Birds Star Wars has hit over 100 million downloads since first launching on the App Store, and there’s very little doubt that the sequel will perform any differently in the market. 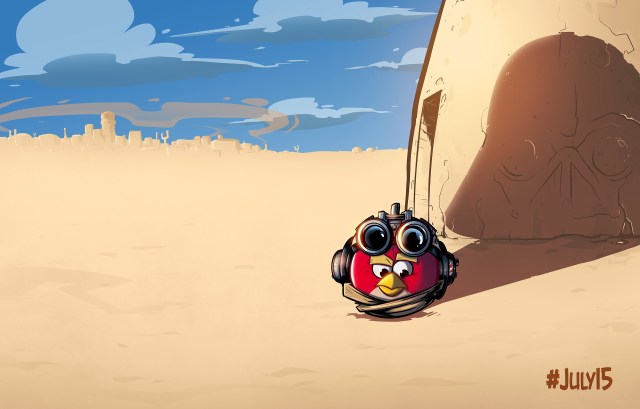