Google shares are on fire. Since June 24, 2013, shares have jumped 7.32 percent to reach an all-time high price of 926.47 shortly after the NASDAQ opened. As earnings are coming up on Thursday, expectations are now pretty high. After a mixed Q1 2013, the company could beat analyst expectations on revenue this time around.

Google shares closed at a price of 765.91 after Q1 earnings. Today’s all-time high represents an impressive 20.96 percent increase over a period of roughly three months. In other words, Google’s market capitalization of $304 billion is now $50 billion higher. Again, this all happened in just three months.

At the time of this writing, the stock is slightly down to 917.59 (-0.59 percent compared to yesterday’s closing price). As Google isn’t making an announcement today, this all-time high is probably due to large financial decisions. Google shares could end up in more portfolios than it used to be.

Yet, as earnings are right around the corner, today’s news is a good opportunity to take a step back and look at Google as a whole. Recently, Google has been a more focused company. It has been killing underperforming products, even if it means shutting down beloved service Google Reader. When it comes to acquisitions, Google isn’t as reckless as it used to be. This year, the company didn’t “pull a Motorola.” Instead, it is closing smaller and more strategic acquisitions. It still has to pay $1.1 billion for Waze, but it’s small compared to Motorola and its thousands of employees. Ads still represent the vast majority of Google’s revenue.

The 2013 edition of the Google I/O developer conference was a great example of the company’s new focus. Instead of showcasing bold products that turn into failures, such as the Google TV or the Nexus Q, Google chose to talk about APIs and core products, such as Google+ or Google Maps.

While Google+ isn’t yet a definitive success, people can’t say that the company isn’t putting enough resources at work on the social network. But it isn’t Google’s only product. At the same time, Android, Chrome, YouTube, Google Maps and of course Google’s search engine all remain very important on Google’s roadmap. Now if only the company could find a way to diversify its revenue, investors would certainly appreciate it. 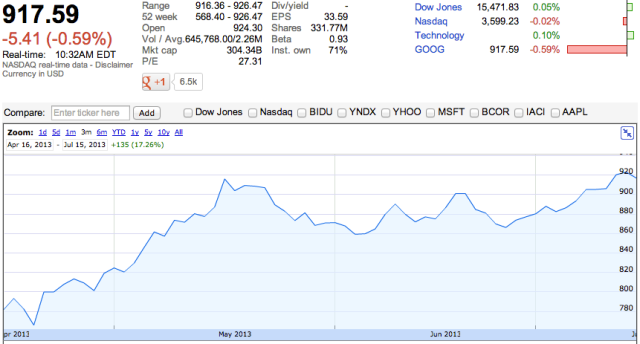