A couple of engineers who used to work for About.me have launched a new service called Finally.io in private beta. That service is designed to help other developers and engineers to keep tabs on their cloud server infrastructure and to prevent it from breaking.

The idea behind Finally.io is to monitor the health of cloud server performance, while also providing alerts before something goes wrong, and giving actionable insights into how to fix problems. The service currently works with Amazon Web Services and New Relic, using data provided by those cloud services to create an interactive dashboard to keep track of how they’re performing.

All that users have to do is enter their credentials for the cloud services they use into Finally.io and it will begin tracking the performance of that infrastructure. It then alerts users when it notices something strange happening — for instance, when a server starts to slow down — and recommends solutions for how that problem might be fixed. For Finally.io the key is in providing those recommendations and helping users to mitigate problems before they happen. 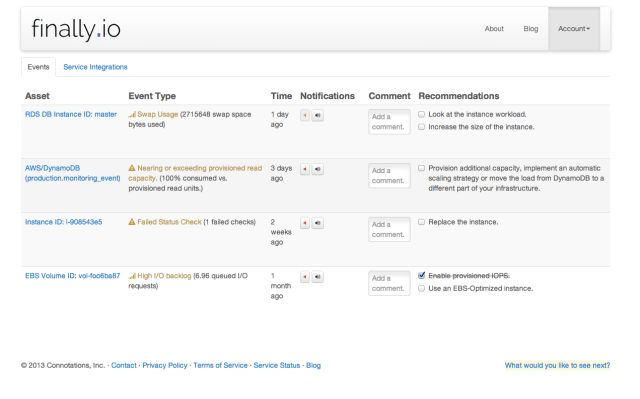 Finally.io was founded by Gotszling and Alex Bendig, who were both early employees at About.me. According to Gotszling, the two decided with the spinout of the company from Aol that it was time for them to try something new. So the two have been working on Finally.io since February, recently running the service in private beta with a limited number of users.

Today, the service is launching into a public beta period, allowing anyone to sign up and try it out with their own cloud infrastructure. For now, it’ll be offering that dashboard for free, as it refines the service, collects more data, and starts working out any kinks of its own. But once it begins charging for the service, Gotszling says the two will likely be looking to charge on a monthly basis, with the price being related to the size of the number of servers that it’s monitoring.