The app features roughly 20 categories at launch, mainly jewelry and tech accessories like iPhone cases. The items, which start at around $9 for an iPhone case and go up as high as $350 for a metal ring, can be configured then ordered directly in the mobile application. Ebay’s partners will then ship the products directly to consumers within 7 to 14 days.

3D printing technology is now gaining mainstream interest and awareness. A wide range of creatives are making art – not just guns – using 3D printers and software, then selling their wares everywhere from offline shops and museums to online storefronts and personal websites.

Ebay’s move to promote 3D printed goods comes at a time when other major retailers are also buying into the trend. Staples announced in May it would begin selling 3D printers, for example, and Amazon launched its own 3D printing store in June. But in order to buy the output of the devices, non-geeky consumers are often still shopping sites like like Shapeways or Etsy, or maker marketplaces like Custommade, Makeably, or recently launched Mixee Labs, for example.

Shapeways, which raised $30 million in Series C funding this April, has been especially instrumental in making 3D printed goods accessible to more of a mainstream user base. Even if you’re not interested in the still somewhat complicated process of designing original products, the site lets users shop a variety of print-on-demand goods, or even turn their own ideas into products using one of many ready-made apps. 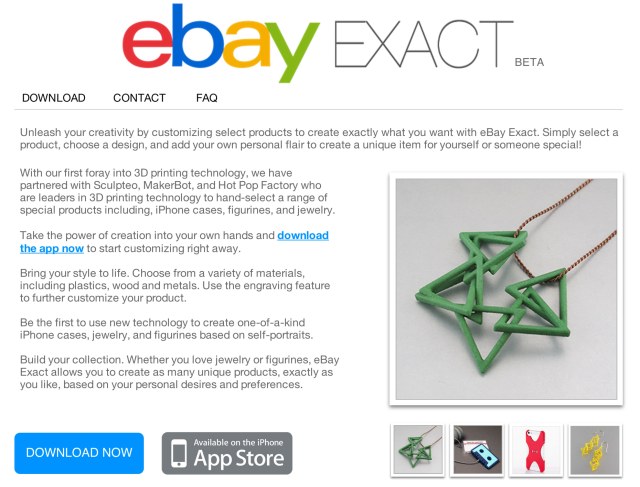 Meanwhile, though eBay sellers have offered a variety of 3D printed items for purchase on the site, there wasn’t an easy way to browse those items or figure out which ones could be further customized. The new eBay Exact app changes that, though eBay’s choice to launch it as a standalone application may limit its exposure.

The app also serves as another potential revenue stream for the company, which could grow the more popular 3D printing becomes. Though eBay didn’t disclose the terms of its deals with its 3D printing partners, it’s likely that it’s seeing a portion of those sales it facilitates. In addition, eBay-owned PayPal is integrated for easy checkout.

“Shoppers today not only want to buy items anytime, anywhere through mobile devices, but they also want to be able to personalize their purchases, said Steve Yankovich, Vice President of Innovation and New Ventures for eBay, in a prepared statement. This is the common belief among those hyping the 3D printing trend, of course. But even if consumers are more aware of the possibilities, the market is young. To what extent consumers will demand, seek out and purchase 3D printed, or otherwise customizable, goods still remains to be seen.