IFTTT, the web services automation startup backed by $8.5 million from NEA, Andreessen Horowitz, and others, is now available as a mobile app for iPhone. Like the web version of IFTTT, the app allows you to create and edit tasks (in IFTTT lingo, “recipes”) that allow you to kick off actions based on other activities. For example, if it’s raining, then text me, or save my Gmail attachments to Dropbox. But by its mobile nature, the new app can also now tap into iOS native applications like your iOS Contacts, Photos and Reminders.

The startup’s name is an acronym which describes what it does in decidedly geeky terms: “If this, then that.” The idea to put tools that stitch together and automate web services in the hands of consumers has been around for a long time – most notably, perhaps, with Yahoo Pipes, an online service for mashing up and manipulating content from around the web.

But where Yahoo Pipes is still overly complex for the typical end user, IFTTT is overly simple. 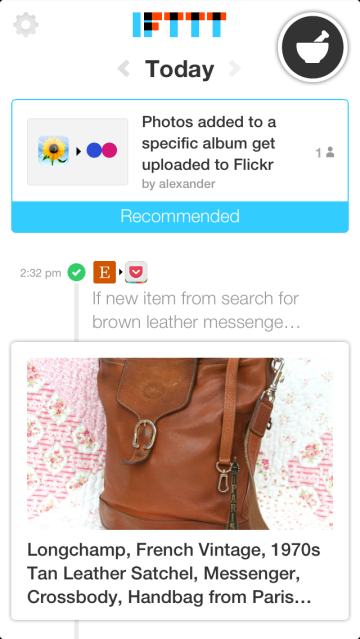 After spending some time with the mobile version, there are two things I’ve come to realize. One, that the minimalistic and tappable mobile interface is now my preferred way to interact with this service. It’s perfectly designed and incredibly easy to use.

And two, that I wish the iOS app integration were a little more robust.

The IFTTT app suggests a mobile-specific recipe upon first launch called “Save my iOS Photos to Dropbox.” While that seems useful enough, the ability to auto-upload camera photos to Dropbox is actually a feature of the Dropbox iOS app itself (though IFTTT lets you configure a specific folder), so it’s not as handy as it first sounds.

This illustrates one of the challenges I’ve faced with IFTTT in the past. The idea of IFTTT is sometimes more impressive than the reality. This is not necessarily the startup’s fault, though — it’s often a problem with the openness of the APIs it relies on.

Of the 67 channels that are supported, three have been built for iOS. In terms of these new iOS app-specific recipes, those designed to work with the iOS Photos app are the most useful, I found. For example, you can configure IFTTT to automatically upload photos to a variety of services, even specifying which kind of photos go where (e.g. photos taken with the front-facing camera, screenshots, those in particular albums, etc.) However, IFTTT falls short on executing one of the more obvious mobile-specific actions you would want to take next, like sharing photos with someone else via SMS.

According to CEO Linden Tibbets, the SMS limitation, for now, is by design. Though he explains that it’s technically possible to enable IFTTT to text others, the company wanted to put safeguards in place first so that wasn’t abused.

When it comes to some of the other iOS app options, I spotted a few other missing items, as well. There was no iOS Calendar trigger, which seems like another obvious miss. I’d love to be able to use Apple’s own calendaring application, then have it sync elsewhere, or trigger other actions to occur, for example, like sending texts to attendees, or adding reminders to Evernote.

However, the company explains that, unfortunately, there’s not yet a way for it to directly connect with the iPhone Calendar due to Apple restrictions. That may change with iOS 7, but for now, the entire option is missing due to this limitation.

Meanwhile, when working with iOS Contacts, there was only one trigger to start with: adding a new contact. Again, actions that seem like the next logical step following that activity are also lacking. You can’t send the contact a form email, for example — something that would be helpful to those networking and tagging people into particular contacts groups. You can’t friend them on Facebook or LinkedIn or follow them on Twitter. You can’t send them a text message, which is something new friends often do to make sure the other person has their phone number, as well.

In so many cases, these issues are technical in nature. Tibbets agrees that the friending use case is “super legit” but held back by API and limitations.

“One of the things we’re really excited about is helping our channel partners take more ownership over the things they’re able to do via IFTTT,” he says, implying a need for more direct relationships that would allow IFTTT to bypass some API restrictions.

API Limitations Are An Issue

Many web companies have been dialing down the functionality they provide via their APIs to other third-party developers in order to have more control over their service and network. Facebook, has notoriously pulled its “find friends” feature from a number of competitive apps and Twitter is continually readjusting developers‘ capabilities, and desiccating some businesses in the process. While companies sometimes have valid reasons for doing this at times, IFTTT’s limitations are the flip side of those restrictions. This is why we can’t have nice things.

In addition, Apple’s notoriously tight lockdown on its operating system and apps prevents some of the flexibility that Android users have when it comes to moving data between the mobile app silos, or using apps like Tasker to automate other aspects of their phones, such as enabling and disabling various functions and modes, transferring files, auto-dimming displays, and more. 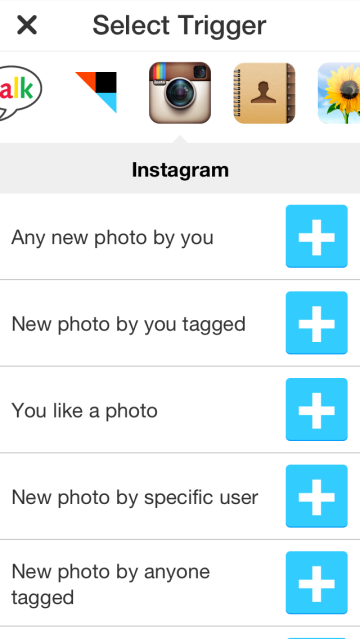 A lot of those kinds of things are out of IFTTT’s reach because of Apple’s restrictions or incomplete web APIs. It’s a problem that IFTTT will need to figure out how to overcome with workarounds or direct partnerships. It’s also one of the problems I’ve had with IFTTT in the past. Often, when it occurs to me to automate a task using the service, I find that the specific activity I want is missing, though the web service I’m hoping to connect to is supported.

I can’t always point the finger at IFTTT in all cases, of course. But other times, I think there’s room for IFTTT to offer a little more customization for power users who want to go beyond the defaults. Or heck, even add an “unless this” to the end of operations.

But that’s me being selfish. IFTTT succeeds by straddling between a service for power users and being one for the “normals.” Going too far with customization options could turn what’s simple and fast into a complex mess — more like Yahoo Pipes.

Android Could Be Better

I’m a little disappointed that IFTTT is an iPhone-first app, too. While iOS is obviously an important platform to address in terms of consumer reach and market share, it doesn’t really showcase IFTTT’s potential on mobile. The comparative openness of Android could have allowed for a wider variety of phone-related actions and would have been a huge draw for a user base who wants an attractive app instead of those (like Tasker, sorry) that look like they were designed by a corporate IT department.

Android is on the roadmap, says Tibbets. “Android is in no way a second place. It’s very cool and getting cooler all the time,” he adds. “It’s just a matter of limited resources.” And personal interest, it seems. The IFTTT team uses iPhones, so that’s where they started.

At the end of the day, IFTTT’s app is a beautifully designed creation and one that is somehow even easier to use than it was on the web. It’s still a must download for busy web users. But with the limitations around Apple’s OS and other web services’ APIs, IFTTT can’t yet reach its full potential on web, iPhone or whatever comes next.