Dispatch, the NYC-based startup launched out of the TechCrunch NYC 2011 hackathon, is flipping its product on its head – it’s shifting from a project management tool with email features to become an email product with project management features. The change, explains the company founders, was inspired by the real-world activity of its users, which today number in the tens of thousands.

“When we would see teams fall off, they would fall off through email,” he notes. “What we’re launching now is our take on: ‘what does a group email experience at work look like, and how can it be better?”

To better highlight the changes in company branding, the startup is also dropping its former domain name “Dispatch.io,” and is changing it to “Dispatch.cc” (referencing the cc: field in email messages.) 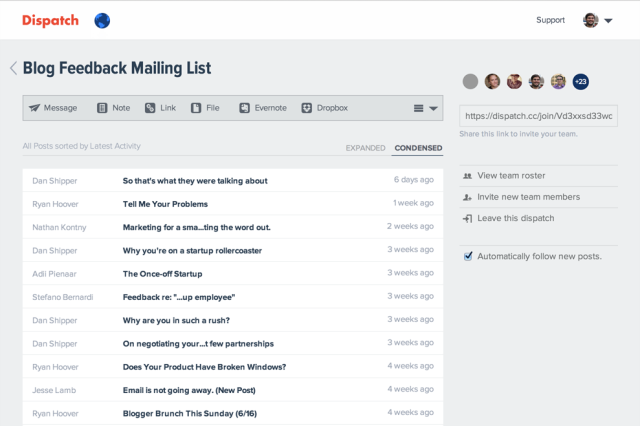 The updated feature set will roll out to current Dispatch users now, though some aspects had been soft-launched for testing purposes ahead of today’s announcement. None of their previous communications have been lost; they’ll just be rearranged in the new Dispatch.cc interface.

For new users, they’ll be able to create their first group (groups are called “dispatches”) during sign-up, and afterwards, they’re given a link that can be shared with anyone via email, instant messaging, or anywhere else on the Internet or corporate intranet. By clicking this link, users can then join the group and contribute to the discussion. The link can also be shared with those outside the company, which allows them to participate without giving them full access to the Dispatch service. 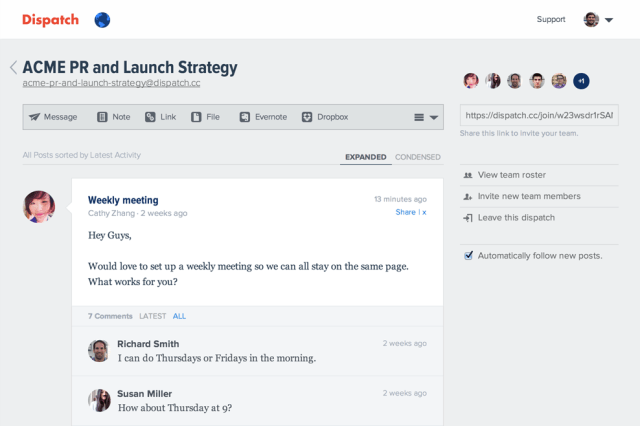 The product itself then works much like a group email address – like a Google Group or listserv, for example. The group receives one email address and everyone sends messages to that email, but Dispatch will then mirror that content on the web.

However, unlike some products for group emails, users can control the flow of messages into their inboxes with simple commands. For instance, a user can reply with “follow” or “unfollow” to start or stop receiving the updates, plus Dispatch.cc will automatically send a reply when another user @mentions you on the thread (an @mention refers to the username-referencing paradigm popularized by Twitter).

Additionally, users can choose to receive all the messages in a thread or none at all — opting instead to follow the discussion on the web instead of their inbox.

“There’s clearly a value in being able to corral relevant things [to the web] to reference later, but all the things that have been decent implementations have been tailored to a specific vertical,” says Lamb of Dispatch’s revised focus, which has been in the works for some time. “But it’s a general problem – everyone had the problem of getting emails they don’t want to get anymore…we think we can solve that for the emails that have to do with your work.” 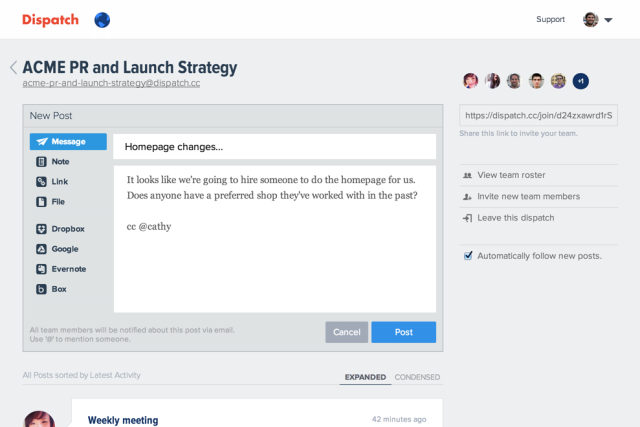 The idea to mashup email and web discussions is an old one, and something that a lot of product management solutions offer today. Several startups, too, have launched email collaboration products, some, like Huddle, which have been more successful than others, like cc:Betty.

But at the core of all these services is the unfortunate, but unshakeable truth: that try as we might, we just can’t get away from email. It seems that email has proven to be the most efficient means to communicate, even if the interface for managing those communications becomes bogged down in the process.

The move comes at a time when there’s some suspicion that the next major product that Google will shut down through its ongoing “spring cleanings” will be its Google Groups service. Born of the acquisition of Usenet archive Deja News, Google Groups has been around since the early 2000’s. But these days, the company’s focus is on its social initiative, Google+. Already, Google has been positioning its newer Google+ Communities as a replacement for Google Groups, forums and other online message boards.

If rumors hold up, and Groups eventually dies off along with other products that no longer serve Google’s social data-gathering goals, there will again be more room for startups like Dispatch.cc to entice users who, like those left adrift by the recent shutdown of Google Reader, will be in search of an alternative.

In the meantime, however, Dispatch.cc needs more work to become a fully fledged collaboration tool of its own. But the team knows that. In the future, they may introduce premium features like attachment support or file versioning, as well as a mobile client. But for now, the new Dispatch service is still free for all users to try.