Adore Me, a fast fashion lingerie and swimwear site, has closed its Series B venture capital round at $8.5 million. The investments from Upfront Ventures, Mousse Partners, and Redhills Ventures bring the company to $11.2 million in funding.

The New York-based company launched in 2012 as the intimates answer to fast fashion giants like Zara, H&M, and Forever21. Adore Me operates on a rapid manufacture-to-retail cycle in which the brand introduces a new 30-40 piece collection every month, at a price point of about $39.95 for a matching bra and knicker set.

Victoria’s Secret, by comparison, only produces two major collections a year. That’s the difference on which Adore Me hopes to get in on the everyday woman’s lingerie budget.

Fast fashion has worked exceedingly well in women’s clothing, but it’s a tough egg to crack in lingerie. A manufacturer might require a minimum order of 500 for a simple t-shirt. For bras, which comprise 35-40 individual components, cost drives the minimum run up to 5,000-10,000. Fast fashion relies on diversity, which is nearly impossible for a lingerie company to deliver unless they have an enormous inventory budget. 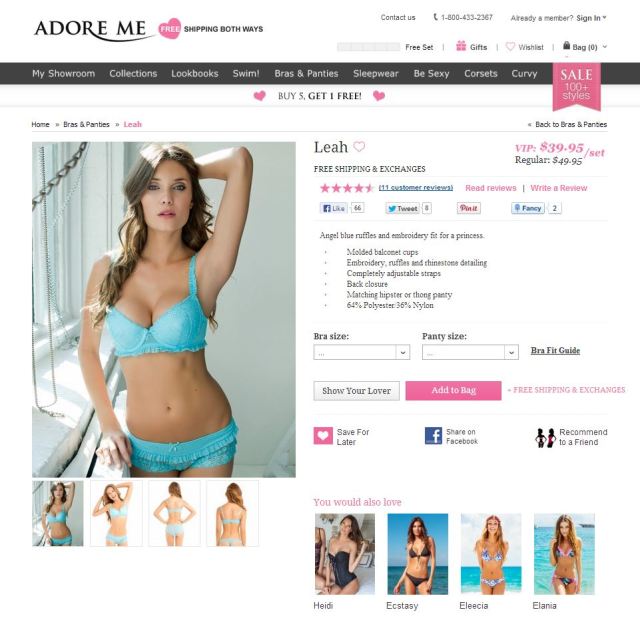 Founder and CEO Morgan Hermand-Waiche told TechCrunch that Adore Me has managed to balance its diversity and inventory by hiring designers that know bra manufacturing well. By building different shapes off the same prototype, they can increase the range of styles without significant production changes.

If Adore Me’s model turns out to be sustainable, it could mean big things for the lingerie industry. The site grew 40-50% month over month in 2012 and early 2013, a rep said, although she would not release exact sales numbers. We do know that the company passed its 100,000th shipment in less than one year. With this latest round of investments, Adore Me will be bulking up its team and inventory budget.

Although there are other lingerie start-ups out there like True&Co and Brayola, those sites aggregate bras from existing brands and focus on helping users find the right fit. As Hermand-Waiche pointed out, there’s not much keeping a user on True&Co once they know their size for a particular brand.