As Facebook begins rolling out its Graph Search engine more broadly to its U.S. English-language user base today, it faces new challenges that were perhaps not at the forefront of our minds when the service was officially announced. Currently, the on-site search engine aims to make the people, places, photos and other interests posted to Facebook more easily discoverable, but for it to succeed in scraping away a subset of user queries that can be answered using social data — things like restaurant recommendations or new albums to listen to, for example — Graph Search will need to gain access to more data.

More importantly, users will need to feel comfortable sharing that data with Facebook — a relationship that may have grown rockier in the wake of the PRISM scandal that revealed a large-scale U.S. National Security Agency spying operation that had ties to Facebook, Google, Yahoo, Microsoft and more.

Why Facebook’s Own Data Is Not Enough

Today’s Graph Search engine — and really, the core of Graph Search overall — is the data that users willingly feed into the social network and share with their friends, their friends of friends, or the general public. This includes things like the places they live or have visited, their geo-located photos, and the Facebook pages and interests they’ve “liked.” 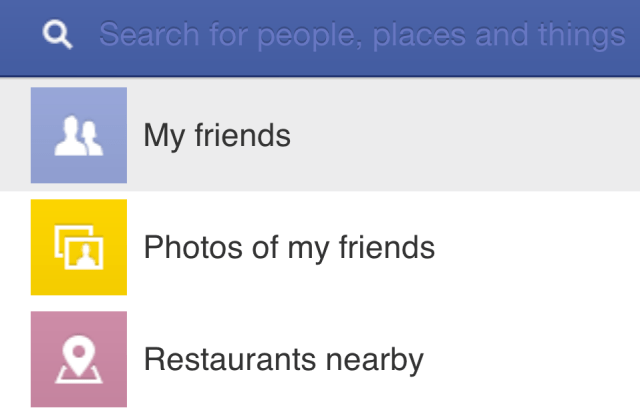 Unfortunately, Facebook’s “like” data is not exactly the same thing as a list of recommendations, especially when it comes to the businesses that have established a presence on the site. Referred to as “dirty likes,” many of these businesses have grown their Facebook “fan bases” through promotional efforts to encourage more likes, only some of which match up to the true definition of the word. Users have been prompted to “like” to enter contests and giveaways, or print out coupons, or receive a discount code for online or offline shopping, among other things.

In addition, users also “like” pages in order to receive updates from an area business they have no choice but to frequent (the nearest grocer, a school, a mall, e.g.), but if you asked their opinion of said business they may give you a much more nuanced opinion – or even a “dislike” in some cases.

There are those users who simply don’t participate in the liking of things, or who like things that don’t have pages set up.

In other words, a Facebook “like” may help establish a search engine’s signal, but it can’t stand on its own to indicate that it is, indeed, a recommendation.

To this end, Facebook is also working on how to get users to “check-in” to venues they visit, and leave a review when they leave. But here, Facebook has competition from other, better-known databases of user reviews from restaurant recommendation resources to travel and hotel guides. That’s why it will be crucial for the company to help build up its Graph Search engine with data users share elsewhere, such as in Facebook connected third-party apps. However, the company says there’s no timeline for that level of integration at this point. 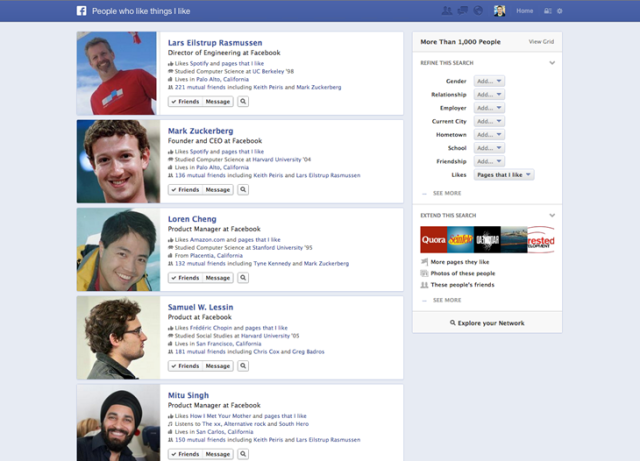 Facebook users receiving the updated search interface today or in the weeks ahead will likely initially use the feature for discovering details from their network of friends. They may go looking for friends who work at a given company or live in a particular city they’re thinking of visiting, for example. Or they may simply use the service to search the world through their friends’ eyes by querying “photos of Paris” to check out an aggregation of vacation photos.

However, in the longer term, Facebook wants to increase users’ time on site by making Graph Search more of an alternative to Google’s search engine by helping users answer questions that they may currently get help with via Google. To do so, the social network is already planning to expand its search engine later on to integrate with third-party services, like those for restaurant or hotel recommendations, or streaming music apps like Spotify.

Later this year, it will also arrive on mobile and begin to parse the text of users’ status updates in order to discover those less explicit connections between people, places and other things they may know about or recommend. 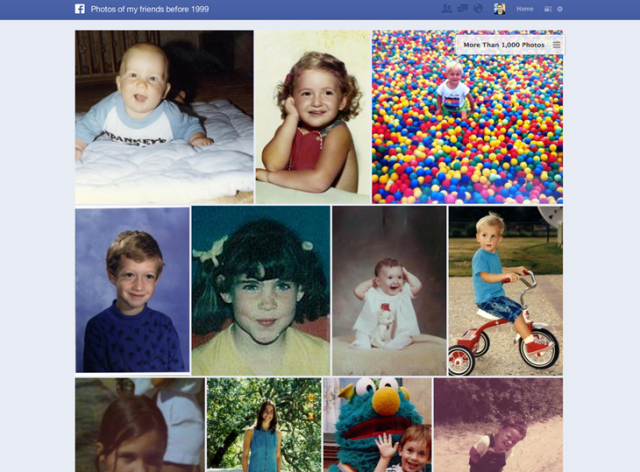 Ahead of the PRISM reveal, the thought that your activity, check-ins, reviews and interests could power a new search experience outside of Google was somewhat inspiring — an innovative tool to leverage the data previously locked away in your social graph. But these days, users seem to be headed away from the more public and open sharing facilitated by Facebook. Though Graph Search respects users’ privacy settings, its mission to “make the world more open and connected” is a discordant note among several competing anti-sharing trends underway now where the focus is on tighter groups of friends, more privacy or semi-anonymity, and data that never finds its way to the more public web — or even Facebook, for that matter.

Since Facebook aims to make Graph Search a product for advertisers as well as users, it will have to overcome the challenge of getting users to share more of themselves at a time when, post PRISM, they feel their trust has been violated. And it will critically need to be able to tap into third-party data sources where it may seem more natural to share such activity — a song you like on Spotify, for example, or a sushi restaurant you didn’t only check-in to, but also actually enjoyed.

Graph Search today falls short in these areas, but the product is still in its very early days. As Facebook begins to leverage its own network of third-party app developers’ data and more, it could challenge Google not as a better way to search the web, but at least in terms of more time spent on Facebook’s network and clicking on Facebook’s — not Google’s — ads.