The beauty box concept is a few years old now, but some of the newer beauty box startups in Asia have modified their business models to be more data-centric, as competition floods the market.

The way beauty boxes have worked is, subscribers pay a monthly fee to receive a shipment of surprise cosmetic items. A lot of these items are sample-sized or have been acquired at great discounts through deals with cosmetics manufacturers. This keeps costs low and preserves margins. The typical subscription fee hovers around the $20 mark for many box companies.

Some of the box startups have realized the value of their users’ profiles, and are actively collecting more data from them, in hopes of growing the potential of monetizing their user base.

Sutardi told me that instead of pushing subscriptions for one box, the company gets potential clients to fill out a questionnaire. The data engine matches users to 25 different box variations before sending one that the user will likely appreciate more.

The benefit to Lolabox is that data. “Our sales proposition to brands is that when they give out samples to people on the street, they walk away and you don’t get anything back. It can also cost a brand $200,000 to carry out a customer survey on a random sampling of women,” he said.

The data from those questionnaires filled out, as well as constant feedback from users per box, is what Sutardi hopes will attract big brands to Lolabox. It has 25 brands to its roster, including the world’s largest cosmetics and beauty company (although he didn’t want to name the specific company). He is aiming to hit 60 brand partnerships by December, he said.

Lolabox’s main competition in Indonesia is Singapore-based Vanity Trove, one of the earlier entrants into the country. And it seems Vanity Trove is switching its model towards data, as well.

It just announced a change that will allow subscribers to choose the samples to be sent to them, moving away from the one-box model. And yes, there’s a questionnaire involved, too—users can select up to eight samples based on their profiles filled out, said founder, Douglas Gan.

This change was just applied to Singapore customers, and Vanity Trove plans to roll this out to the rest of its customers in Malaysia, Indonesia, Thailand and Taiwan by end-August.

Gan said the new customized box was launched so that its brand clients can get better insight to its consumer base, such as the make-up of the segment choosing their products.

Here’s a screenshot of what some of the data looks like to its clients: 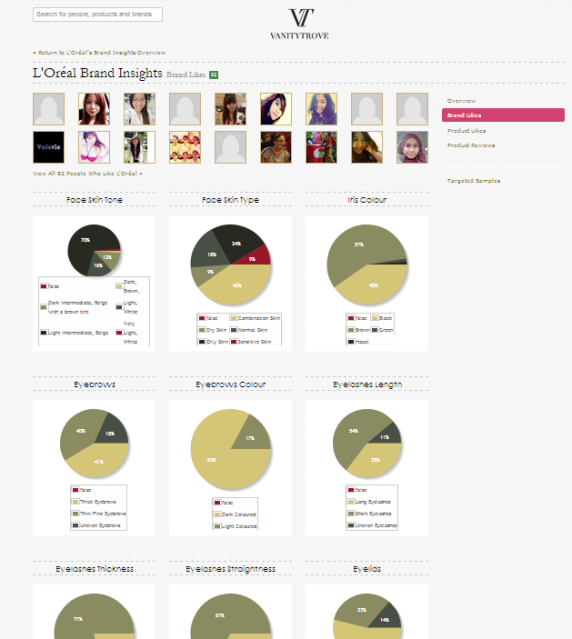 Vanity Trove prices its subscriptions at $20.

Elsewhere in Asia, Lolabox and Vanity Trove compete with Memebox in South Korea and Australian Bellabox, which also distributes in Singapore. Bellabox raised a Series A round of $1.3 million at the start of this year. There’s also Glamabox, which was launched in Hong Kong in 2011, and operates in Taiwan. Singapore and China.

None of these appear to have switched to the customized box, however.

Overall, these Asian startups considerably new, compared with some of the bigger names in the business. In the US, there’s Birchbox, which launched in 2010, and Rocket Internet’s clone, Glossybox, was launched in 2011. Birchbox got a Series A round of $10.5 million in 2011, and acquired competitor, JolieBox last December.

Again, these seem to be pushing the traditional single box product. San Francisco-based Beauty Army is one of the few which employ a the survey for customized boxes.